A Year Learning from a Japanese Bamboo Craftsman a.k.a. Wazao Shokunin

I first met Masayuki Yamano in September of 2016 at the Bansho in Fukushima Prefecture (more details here). Little did I know then how much he would impact my life. Now that I am back in the United States I wanted to share with my readers and the tenkara community at large my experiences learning from a third generation Wazao Shokunin.

Yamano-sensei and me at the 2017 Japan Fishing Show

As outlined in this article on Discover Tenkara the first basic tenkara bamboo rod that I built under the tutelage of Masayuki Yamano-sensei was in the Fall of 2016. After that one was finished Yamano-sensei invited me to build a more advanced rod with him. This project would take just over 15 months for me to complete. I did about 15% of the work and while I was away Yamano-san would work on my rod, preparing it for my next building session. 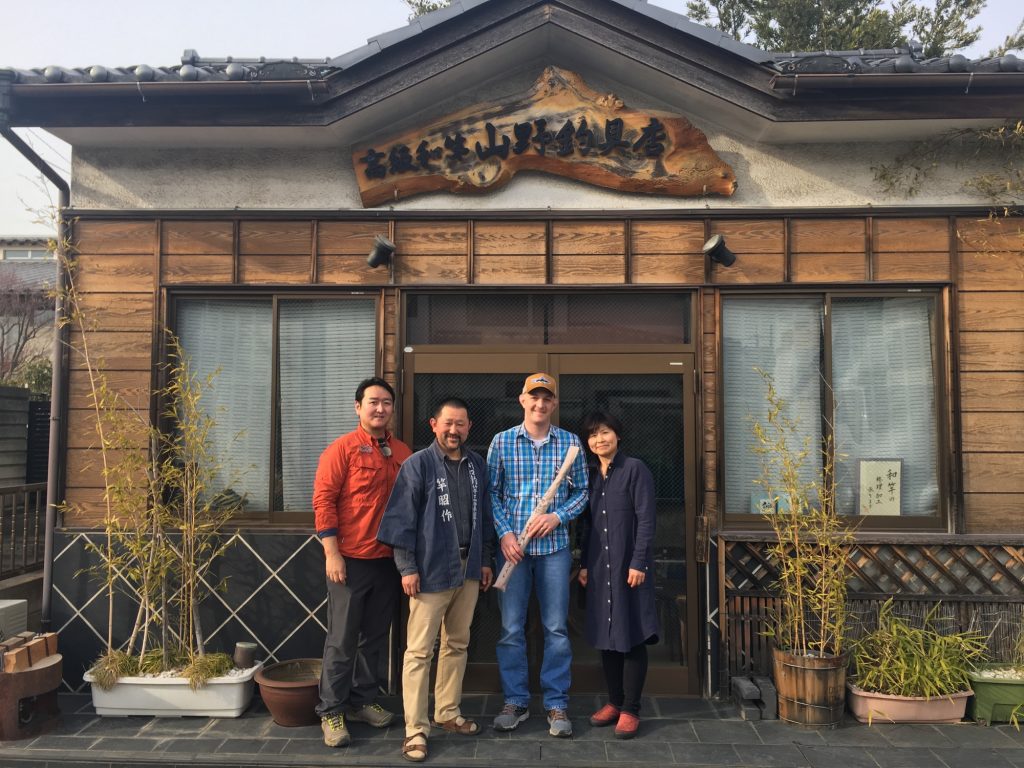 Go Ishii, Masayuki Yamano, myself, and Hiromi Yamano in front of the shop on the day I finished my second bamboo tenkara rod

There is an absolutely wonderful article on the Discover Tenkara site about the process - it is very thorough and precise. It would be a waste of time for me to go into the details here when their write up is easily accessed by anyone with interest in the subject. I encourage you to check it out here.

During my visits to Yamano-sensei's shop my time was divided evenly between working on the rod and drinking and eating. My good friend Go Ishii visited the shop with me too; sometimes to work on his own rod or to film and photograph me working on mine. I looked forward to the dining as much as working on the rod. Every time I visited not only did I learn more about working with bamboo but I also tasted some rare Japanese delicacies. It was a time that I will look back on with fine memories for a long time.

The wife of my sensei, Hiromi Yamano-san also took me under her wing teaching me the basics of the Japanese calligraphy art form known as Shodö 書道. On my last visit she also made me a custom Hanko 判子 - see the photo below so that I could put my mark on my completed bamboo rod sleeve. I really love how the "I" and the "T" together look very similar to my son's name 正. On another visit she also cooked up a delicious dish called Nimono 煮付け from her secret recipe (see the first gallery "Food"). Nimono is fish boiled in shiru stock flavored with sake, soy sauce, and a small amount of sweetening. It was absolutely delicious! 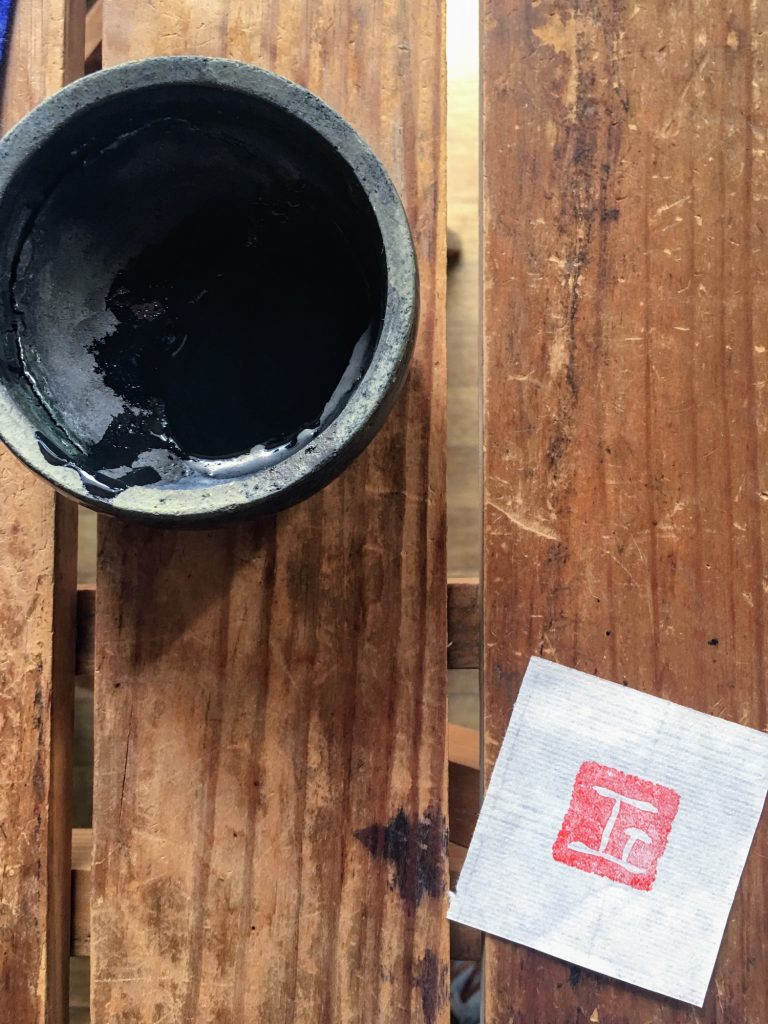 My hanko 判子 with a bowl of sumi ink 墨

Yamano-sensei has two shops, the street front one and the main shop behind his home. Many times during my visits to work on my rod a customer would stop by to have a rod straightened and even once to have a 100 year old ayu rod turned into a herabuna rod. If it's made out of bamboo Yamano-sensei can do anything you can dream up. 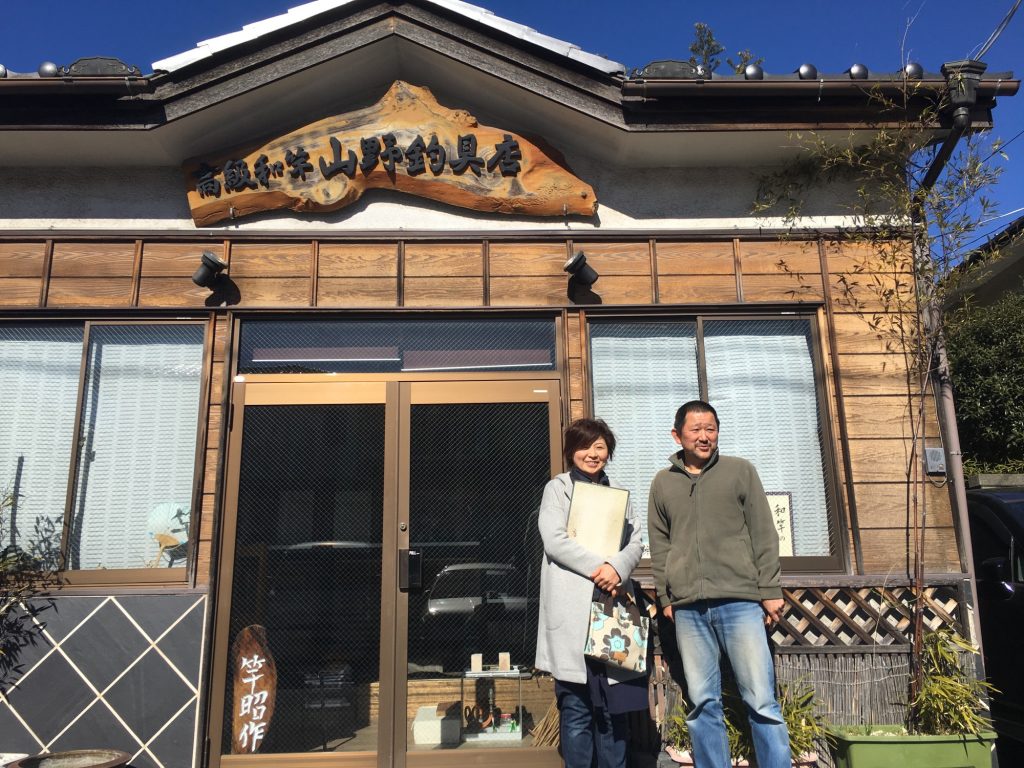 Both my senseis in front of their home and shop.

And without further ado, here are the photos of my finished bamboo tenkara rod: 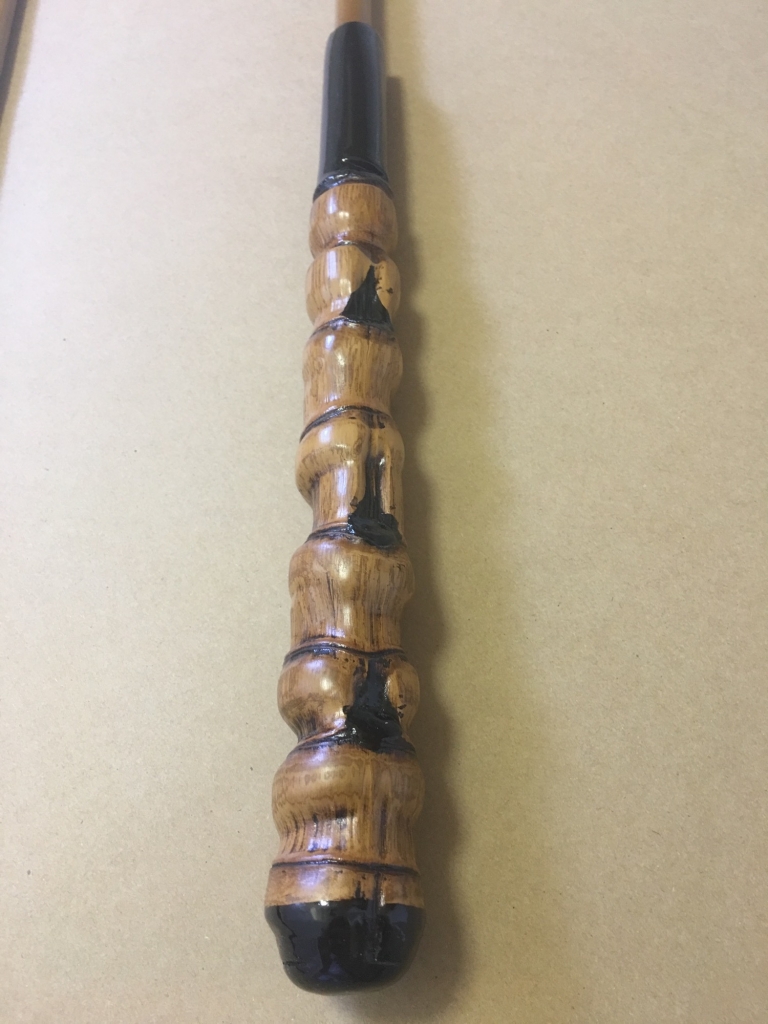 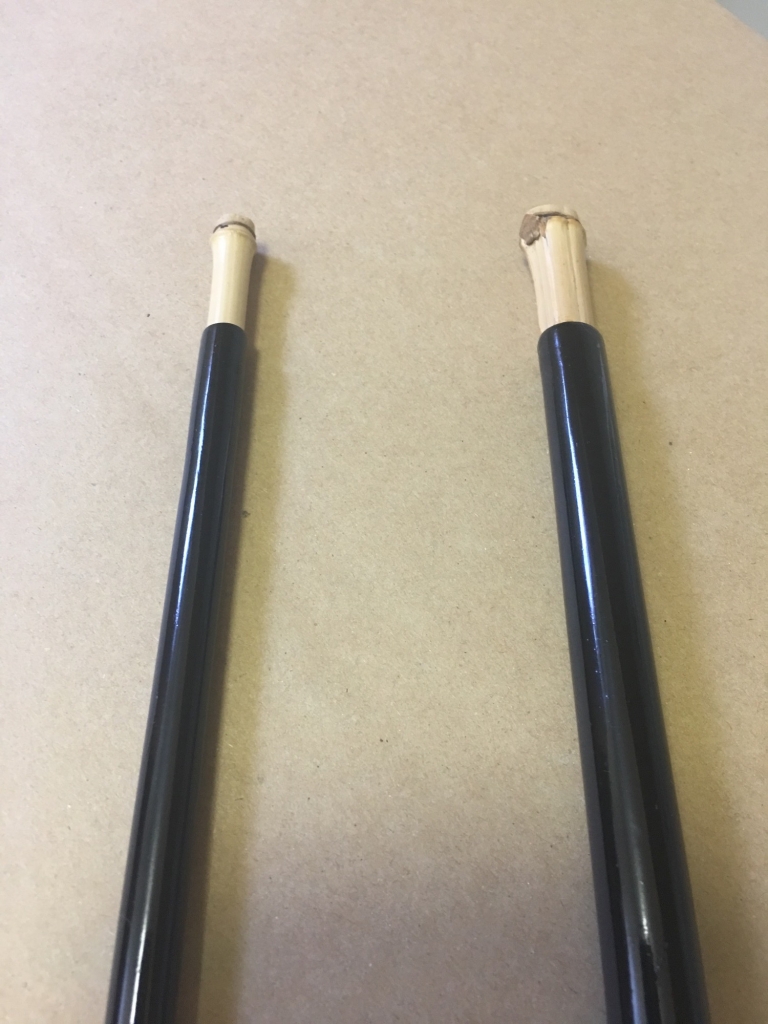 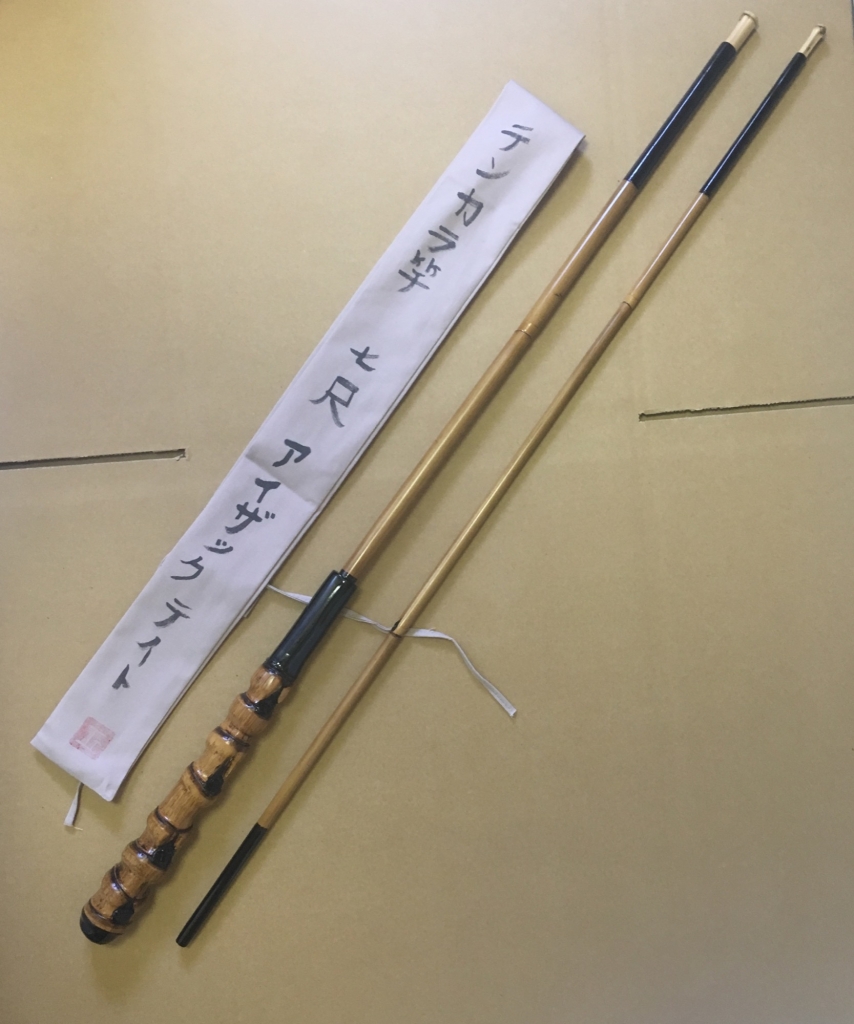 My shodo improved drastically under the careful eye of Hiromi - the wind picked up a little though when I got to ク. 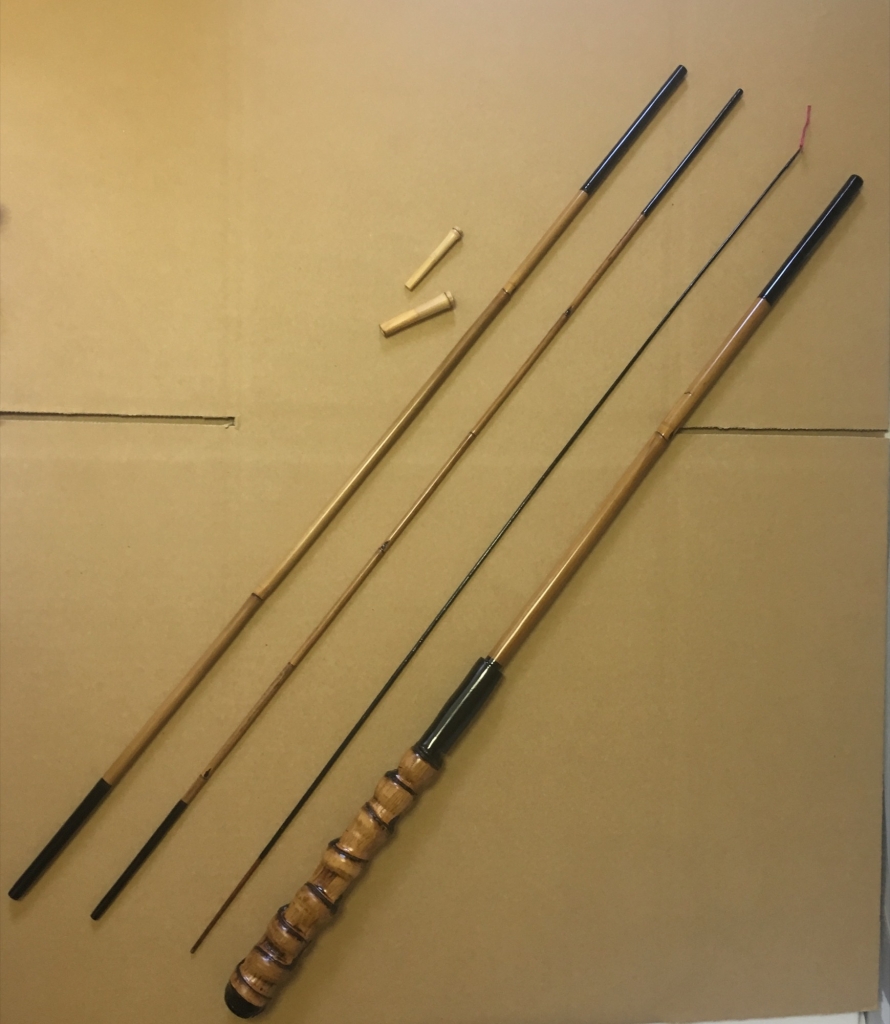 The tip piece is made from a piece of split bamboo that is then sanded down into a perfect round shape. Sometimes baleen is used from whales that wash up on beach... 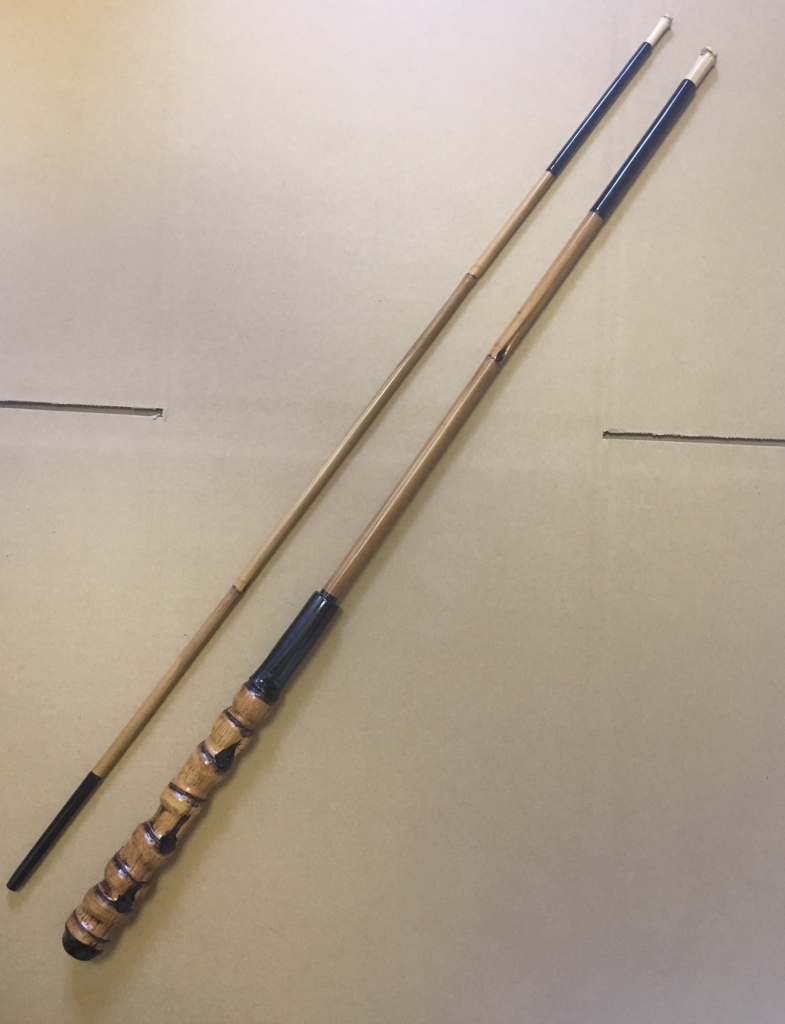 I have been agonizing over this article for over two months now; tweaking it, adding photos, and trying to do justice to not only the Yamano family but the experience of learning from them. Eventually you just have to commit though. So, after numerous revisions I have gone ahead and clicked the "Publish" button. Thank you Masayuki and Hiromi Yamano for teaching me but most importantly for your friendship.

Also, I would be remiss without thanking my friend Go Ishii. Without him there by my side during each and every one of my visits to Yamano-sensei's shop I would have not learned nearly as much as I did. Through his excellent translating I was better able to grasp the ancient art form of edo wazao. If you ever find yourself in Japan look him up, tell him Isaac sent you, and ask him about the フグ魚精.

アイザックテイト ・ありがとうございます。素晴らしい写真。 七尺 = 7 ft. ? 「I hope that フグ魚精 is not what google translates it as being, ewww, OK only for Andrew Zimmern」otoh, if it is. Well, we do eat eggs.

Ahhh the pictures brought back all the memories... thank you for the article Isaac. Have fun using it! (^-^)