Curator's Note: I first got in touch with Dwain Confer (the author of this guest post) on the Tenkara Reddit page in late winter 2021. We soon began exchanging emails discussing all manner of things related to Japan and fishing in the mountain streams of that beautiful country. I was over the moon when Dwain agreed to write a guest post or two about his fly fishing adventures. So, without further ado read on (and be sure to check out his other article here).

My experience of fishing in Japan is much like my experience of living here: charming and befuddling in equal measure. As I drive the highways through the mountains of Yamanashi and Nagano, the rivers and streams I cross are tantalizing—rocky streambeds buried deep in the steep valleys of the Japanese Alps. And the mountains are steep indeed; on one 4-hour drive, I counted 27 kilometers of tunnels burrowed through them. The streams and rivers call to me, promising adventure and discovery, a chance to explore the natural and cultural beauty of the nation I have called home for a handful of years. Yet exploring the waters is not easy, and more often than not I drive past the stream with a sigh and the suspicion that I’ll never be back to it. 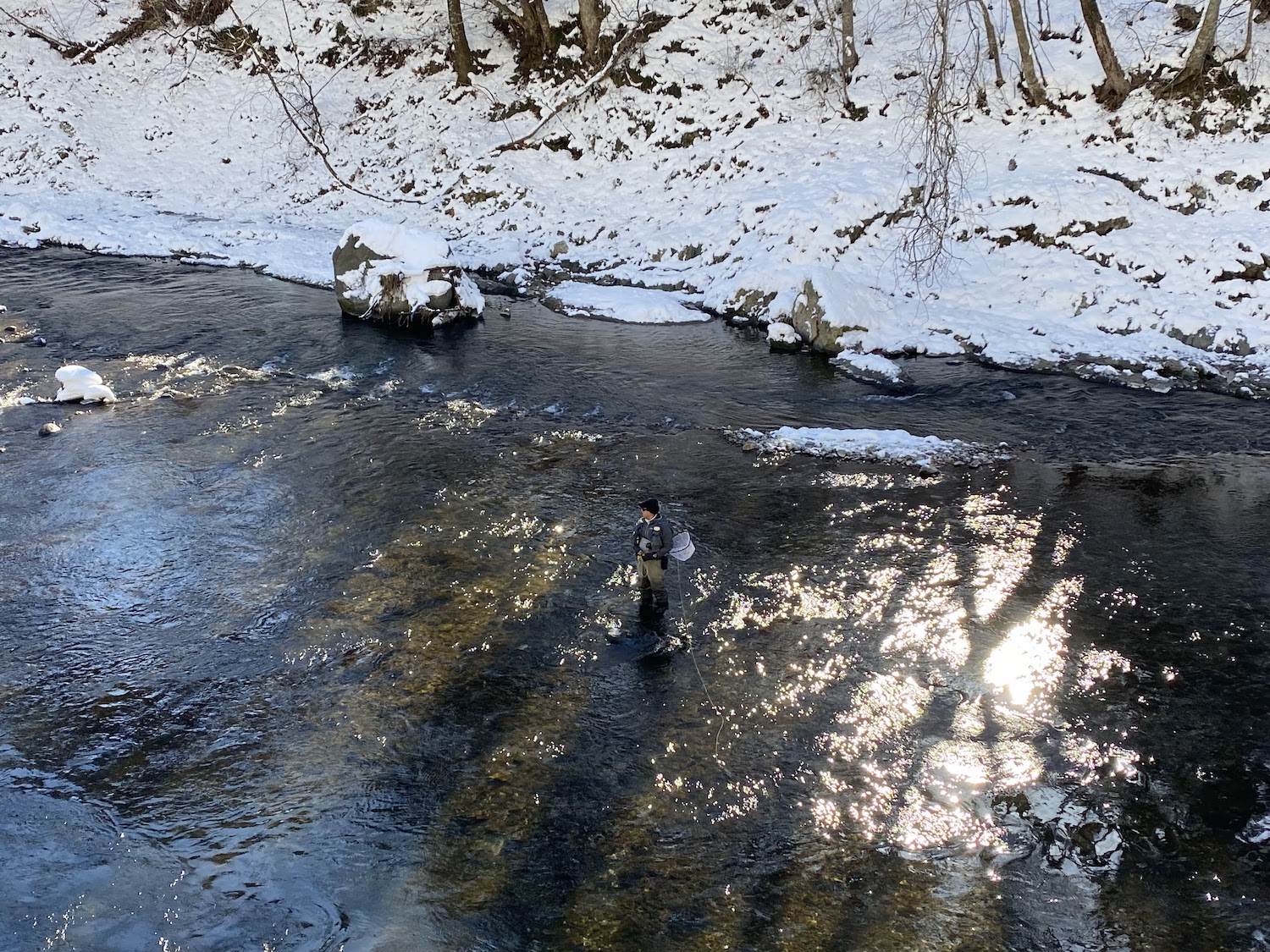 The waters flow off the mountains and join together in wide river beds in the valleys, edged by high concrete banks and seemingly endless farms and houses. There are fish to be had in these wide rivers, most often rainbow trout stocked by local fishing clubs or co-ops. Surrounded by houses and highways, these rivers aren’t my ideal fishing situation, but they’ll do in a pinch. It’s their headwaters that interest me most and that most confound me. Still, when the fishing season closes at the end of September and there’s nowhere else to go, I’ll fish a stocked section. Call it practice season. 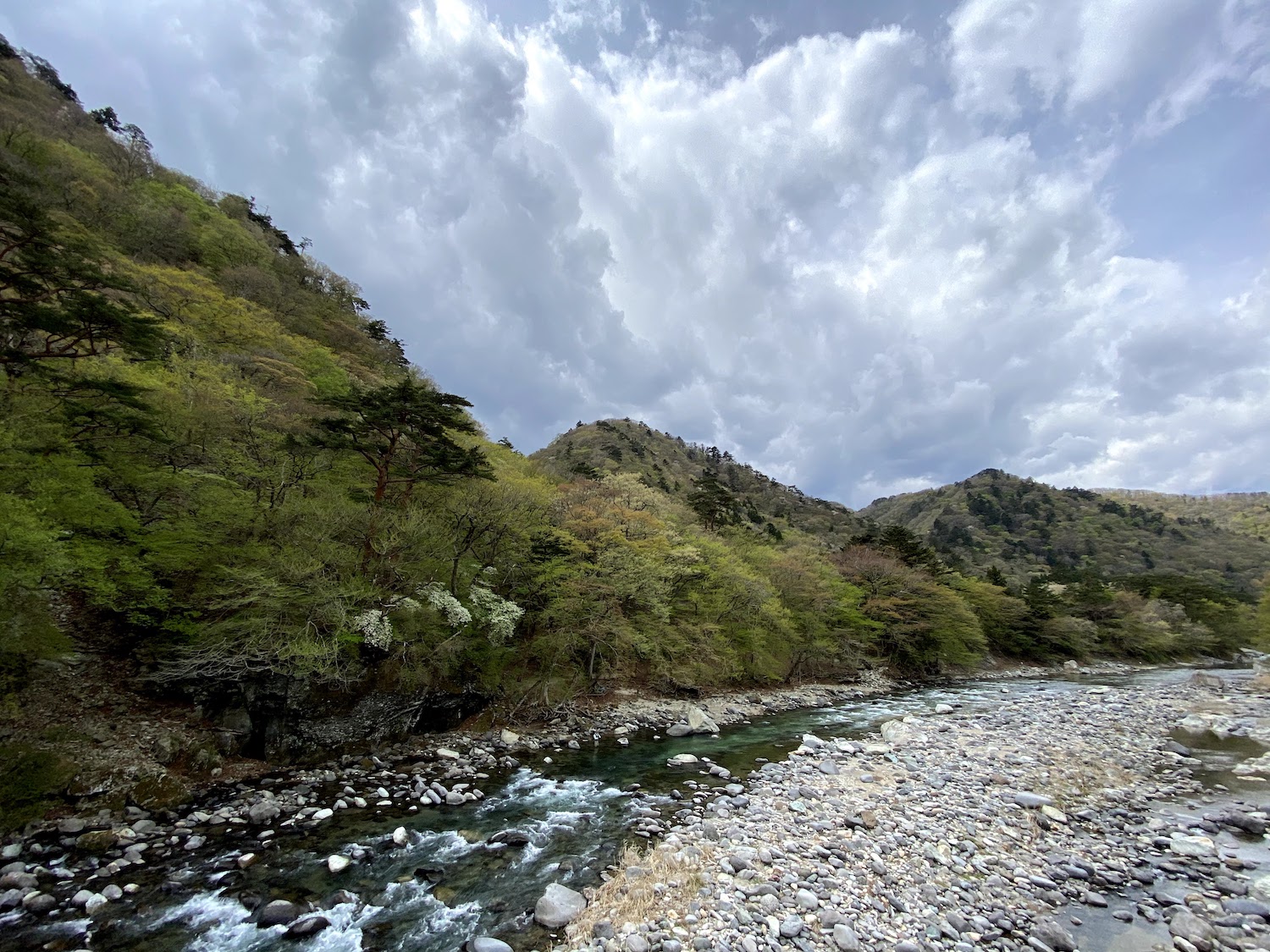 One such river flows out of a narrow valley in Tochigi and down toward the plains of Nasushiobara. It’s large enough to blur the line between being called a stream or a river, and it’s best fished by wading. My buddy Pete and I discovered it while driving home on a cold December evening after having been nearly skunked all weekend at a river an hour away (I say “nearly,” but the fact is that I was skunked—Pete caught the only fish). Driving through a sleepy onsen town, we stopped at a light on a bridge and both happened to glance out our windows and immediately exclaimed, “That’s a fishing river!” We careened around the corner and into a parking lot where we chatted with a young angler just putting away his tenkara gear who told us the name of the river and told us about his day. It was his first time fishing the river, one of the only ones that doesn’t close in September, and he had hooked into 20 fish. A week later, Pete was back on the river (I couldn’t make it) fishing in sub-freezing temperatures. His report: “There are a ton of fish, and they’re big!” 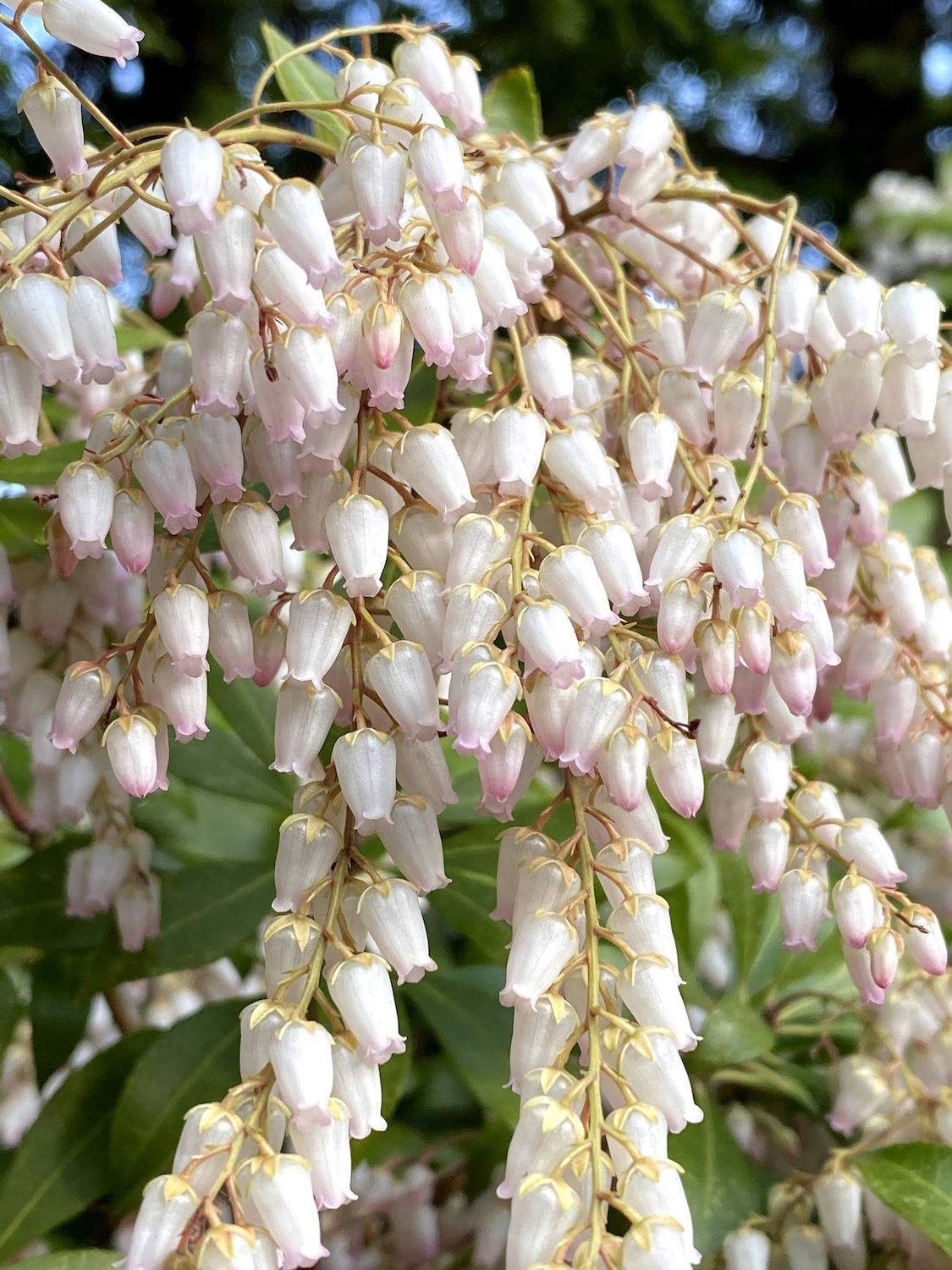 We were still learning about fishery management in Japan so we were not sure about the frequency or volume of stocking, but we frankly didn’t care because we just needed to fish! When the spring season opened, we came up for the weekend and had a blast exploring the ~1.5km of water. It was sakura season, and the cherry trees were in full bloom—the blue skies, the roaring water, the white petals: it was magical. There wasn’t a single other person on the river. On the first day, I hooked into 7 big fish. And I lost them all. 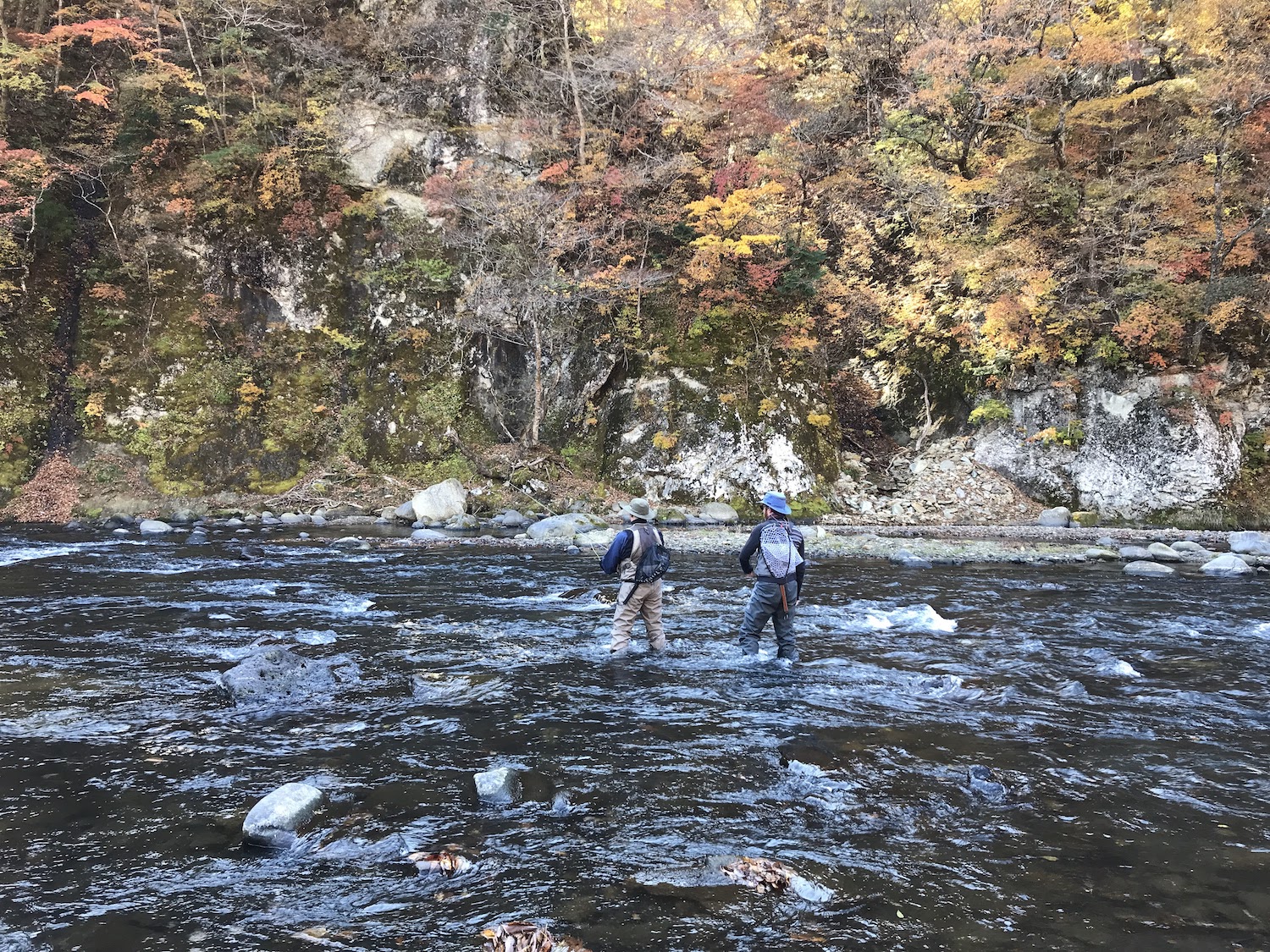 I got into fly fishing later in life, and most of my fishing (or at least catching) was of small browns and brooks in the Eastern US. Hooking them requires finesse, but “fighting” them is pretty straightforward. I didn’t know what to do when I hooked a rainbow who was closer to 20” than to 12”, when he took off downstream toward the rapids that would have tumbled me into a pool well over my head. So I lost him. And the next one. And the next one. Frustrated, I went back to the hotel and read everything I could find, watched every video that looked useful, and promised myself to do better. 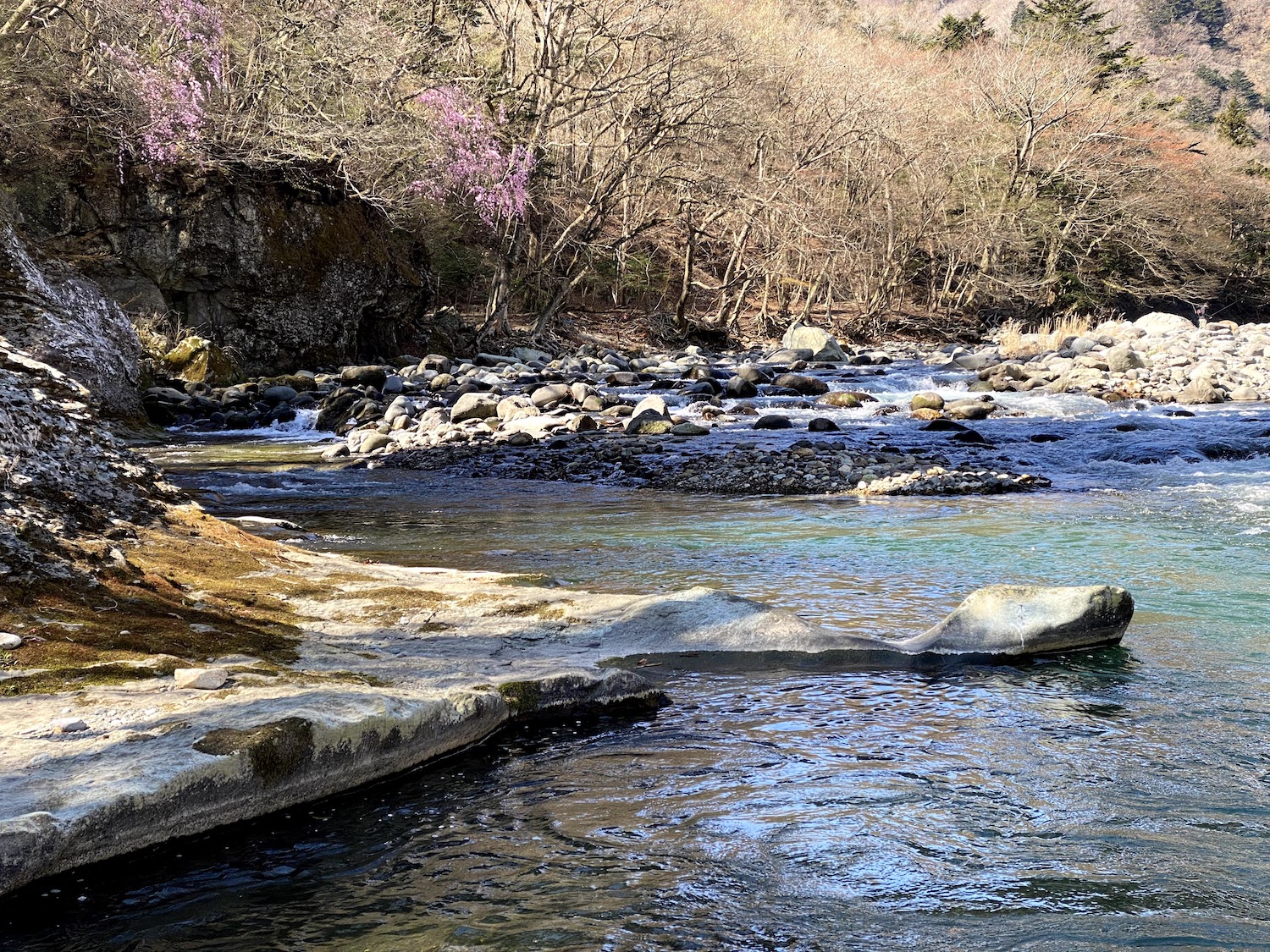 It helped, and the next day I brought to the net the 3 largest trout I’d ever caught, all in the 16-19” range. Did I mind that they were stocked and likely willing to eat anything floating down the river? No. Did I mind that I caught all of them on a nymphing rig? Nope. Did I rededicate my life to fly fishing because of that day? Yep. 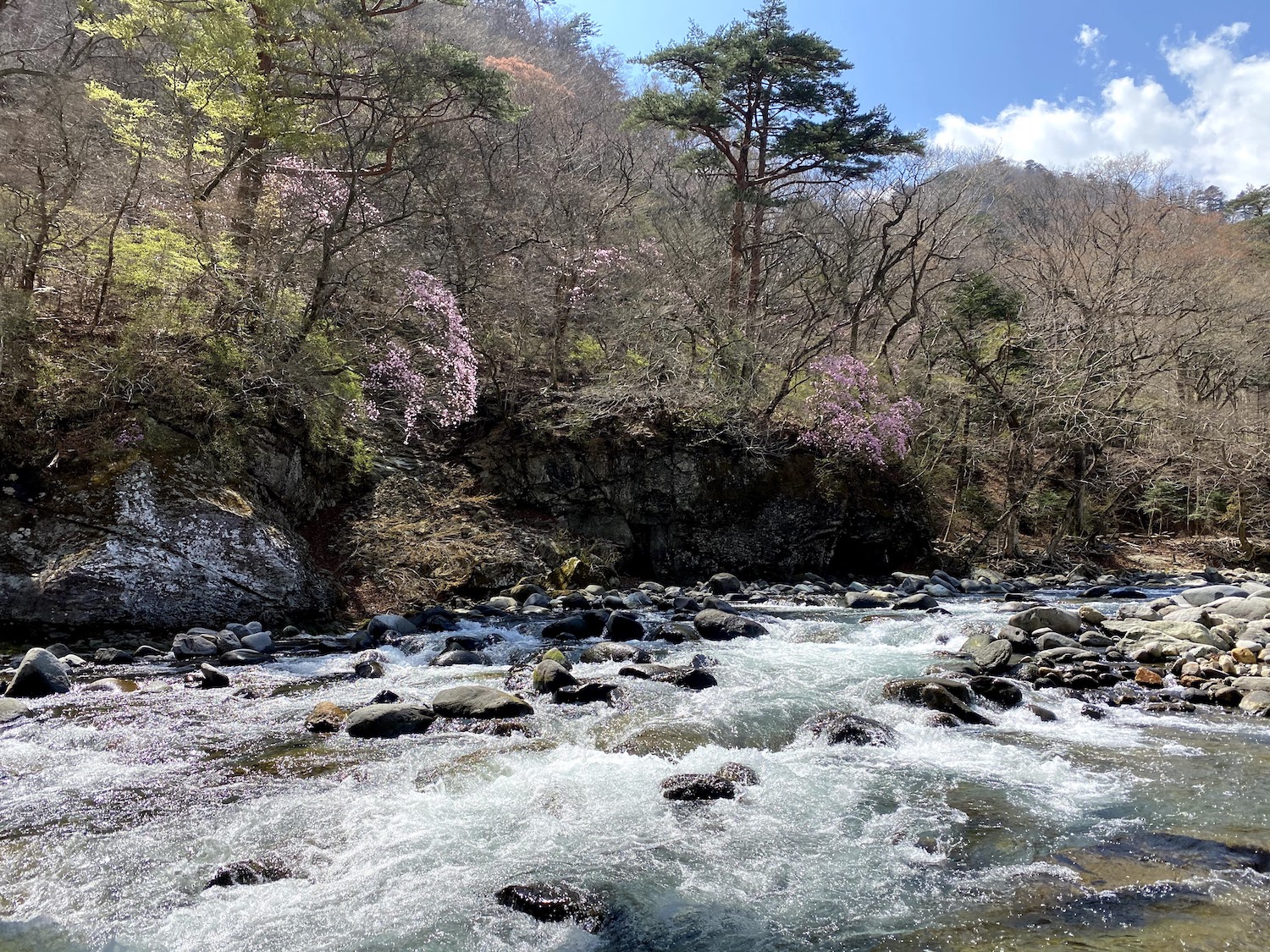 Pete and I have gone back to the river half a dozen times in the last year, and as Covid’s shadow has diminished in Japan, the dedicated anglers of Japan have returned in droves. The charm of the first time hasn’t ever been repeated, but each time I go, I learn something new about my fishing technique and about fish behavior (again, stocked rainbows, so not nature’s most discriminating eaters). And though I get frustrated at sharing a short river area with lots of other angers, I’ll probably keep going back. There’s that one hole where that one fish keeps taunting me.

But where I really want to go is up into the mountains, to where the little Iwana lurk. No roads, no crowds, no invasive rainbows.

It’s not easy to find information in English about fishing in Japan, which is why Isaac’s website is such a treasure and gave me hope that I could find my way into the mountains. Finding where to buy a license is my first worry (I am a rule follower), and asking for forgiveness only works if you know the language to ask it (apart from “gomennasai,” I wouldn’t know where to begin).

But I sure do dream about it, and my Google Maps is littered with pins on remote blue lines that look good in satellite view. Later this spring, Pete and I hope to explore some of these. We’ve got our gear, our tenkara rods, our maps, everything we need to start. We just need to get out the door. Sometimes that’s the hardest part.