Curator's Note: I first got in touch with Dwain Confer (the author of this guest post) on the Tenkara Reddit page in late winter 2021. We soon began exchanging emails discussing all manner of things related to Japan and fishing in the mountain streams of that beautiful country. I was over the moon when Dwain agreed to write a guest post or two about his fly fishing adventures. So, without further ado read on (and be sure to check out his other article here).

In October of 2020, the pandemic situation in Japan seemed settled enough that my fishing buddy, Pete, and I felt comfortable enough to fly from Tokyo to eastern Hokkaido to fish the Akan River in the Akan-Mashu National Park. It was our first overnight fishing trip together, and it was in fact going to be the longest fishing trip I had ever taken as an adult. 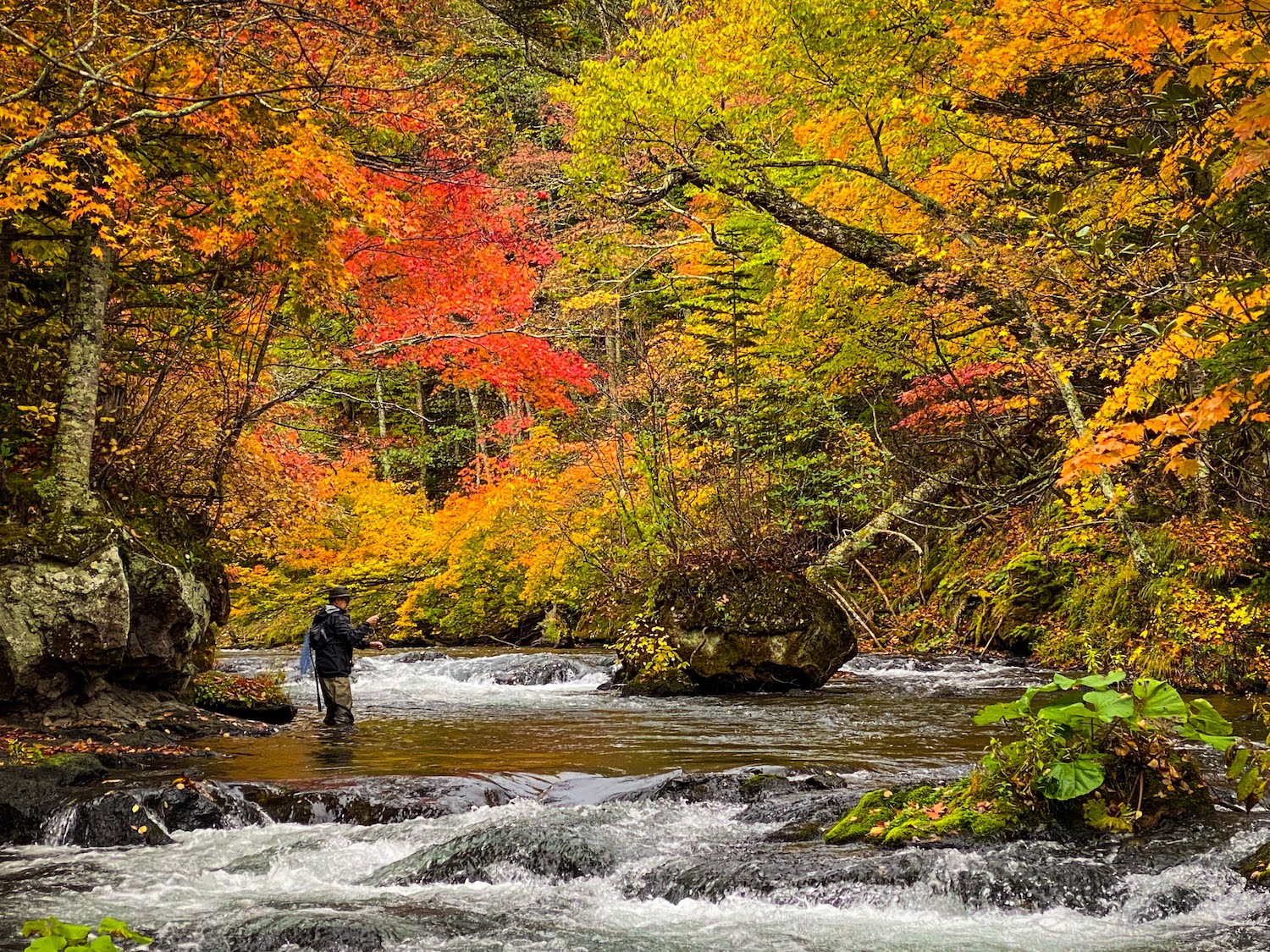 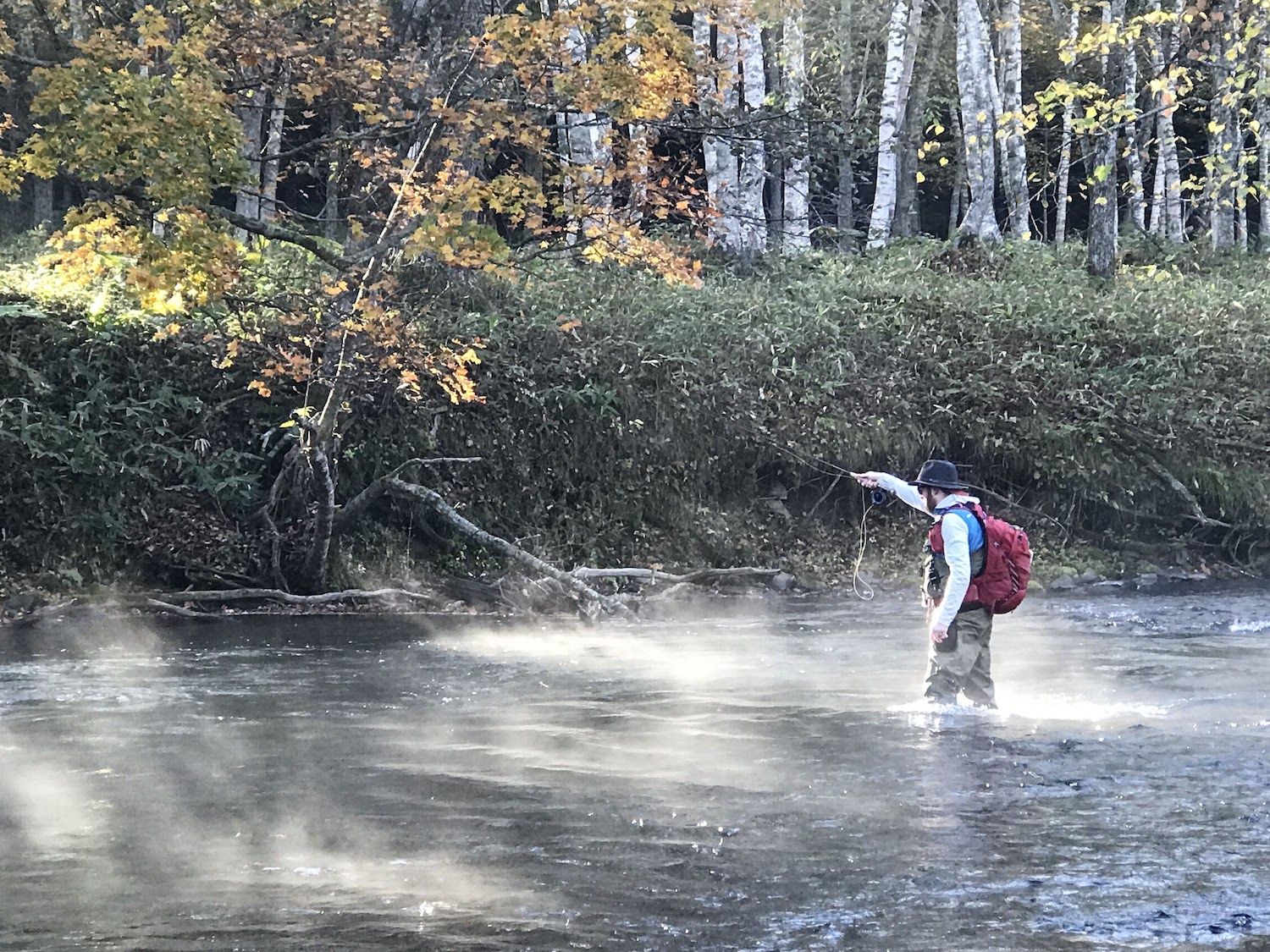 The Akan River flows out of Akan Lake at the foot of Meakan-dake, a volcano that still spews gasses out of its peak and southern slopes. Over the summer, unable to leave Japan because of travel restrictions, my family and I had brought our car on a ferry to Hokkaido and camped for two weeks, including 4 days at Akan. We climbed Meakan-dake, explored the charming Ainu village of Akankokohan, and hiked around nearby Lake Onneto. I took 2 mornings to fish the Akan River and caught a couple of small rainbows and a yamame, though nothing too exciting. I confess that I didn’t fish very intensely in part because I was nervous about bears—signs everywhere warned to keep an eye out for them, and though I sometimes scoff at the Japanese tendency for caution, I wasn’t going to question them about bears. (In fact, three days later at another location, the onsen across the road from our campsite was closed a couple of hours after our morning bath because a bear had dragged a deer onto the premises and was eating. A ranger fired shots to scare it off. But I didn’t take a bath that night.) Because of that, I knew that I wanted to fish the waters again. Fortunately for me, Pete was up for it. 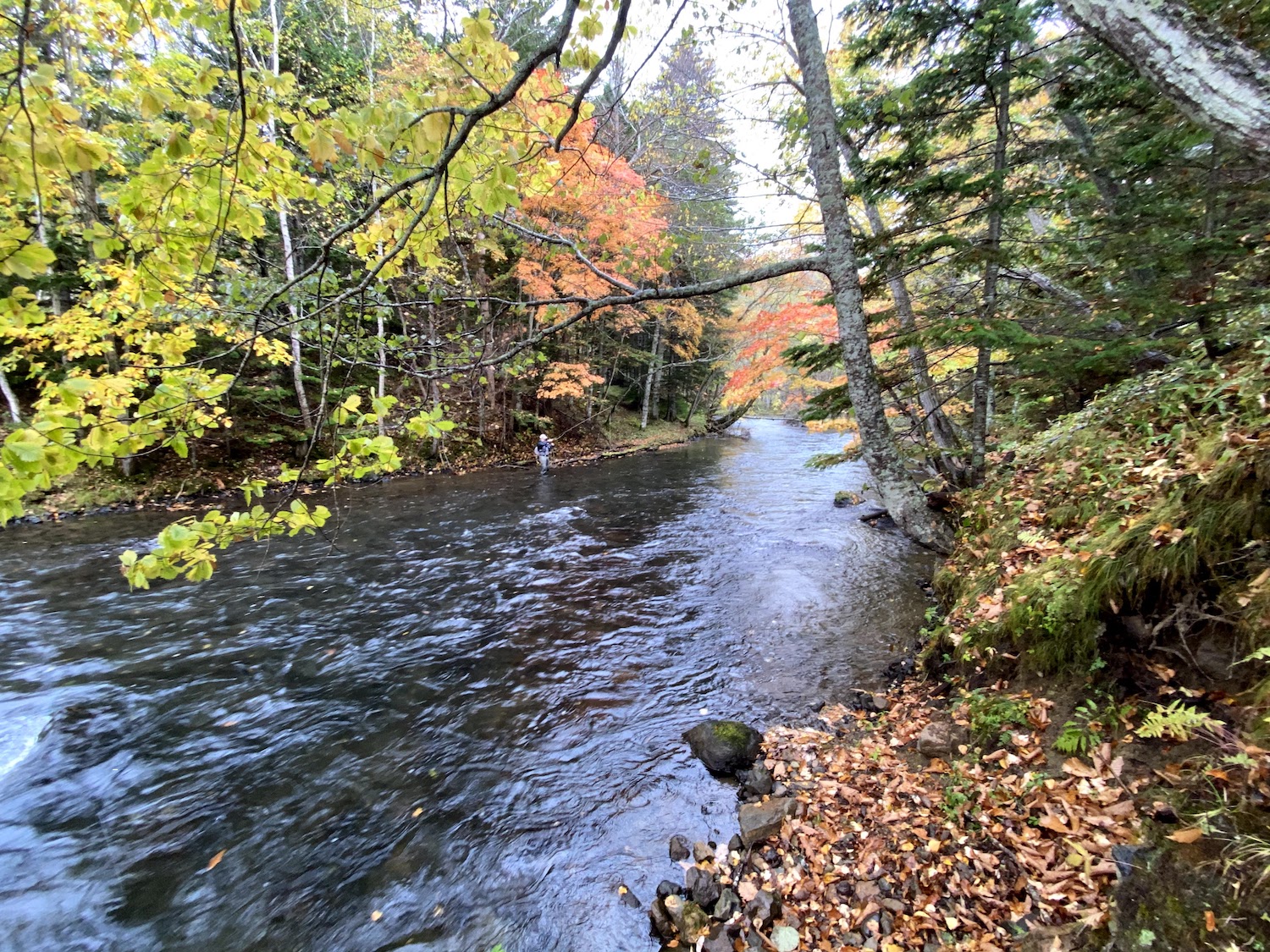 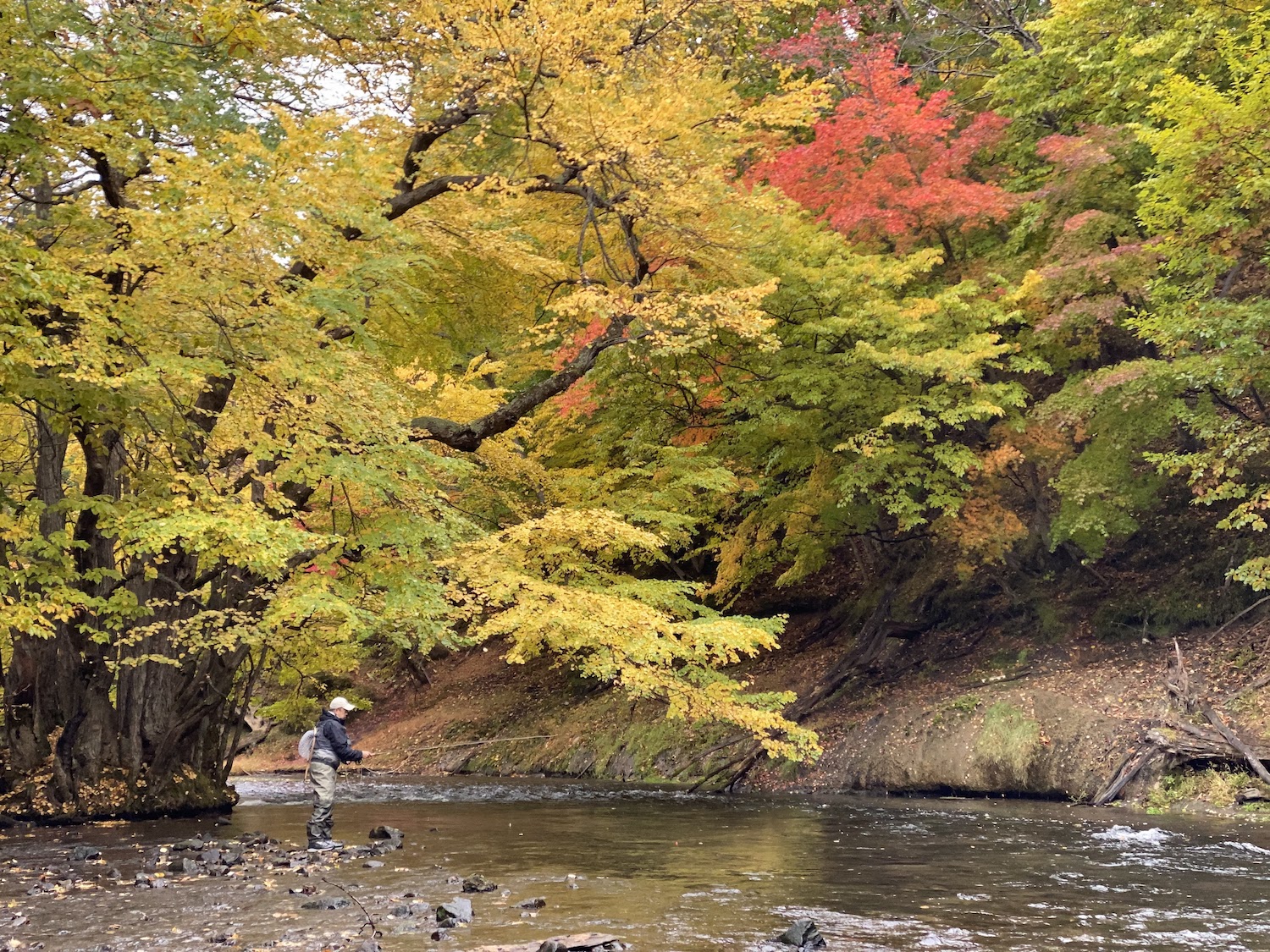 We had a 4-day weekend to spend there, so we flew up early Saturday morning and were fishing by a little after noon. The Akangawa flows south for 98 km from its source to the Pacific, and most of the upper half is fishable. The first few kilometers from the source are C&R and known for large rainbow while the lower portions hold a good population of smaller rainbow. One local angler we met on another trip (whose blog was instrumental in helping us plan our trip in the first place) said he didn’t like fishing the Akan because the fish got too fat living in the nutrient-rich water. The upper portion of the river has hot springs that bubble along the edge then trickle and pour into the river; rich in minerals, the water supports a large and healthy population of trout, some wild and some holdovers from earlier stocking. 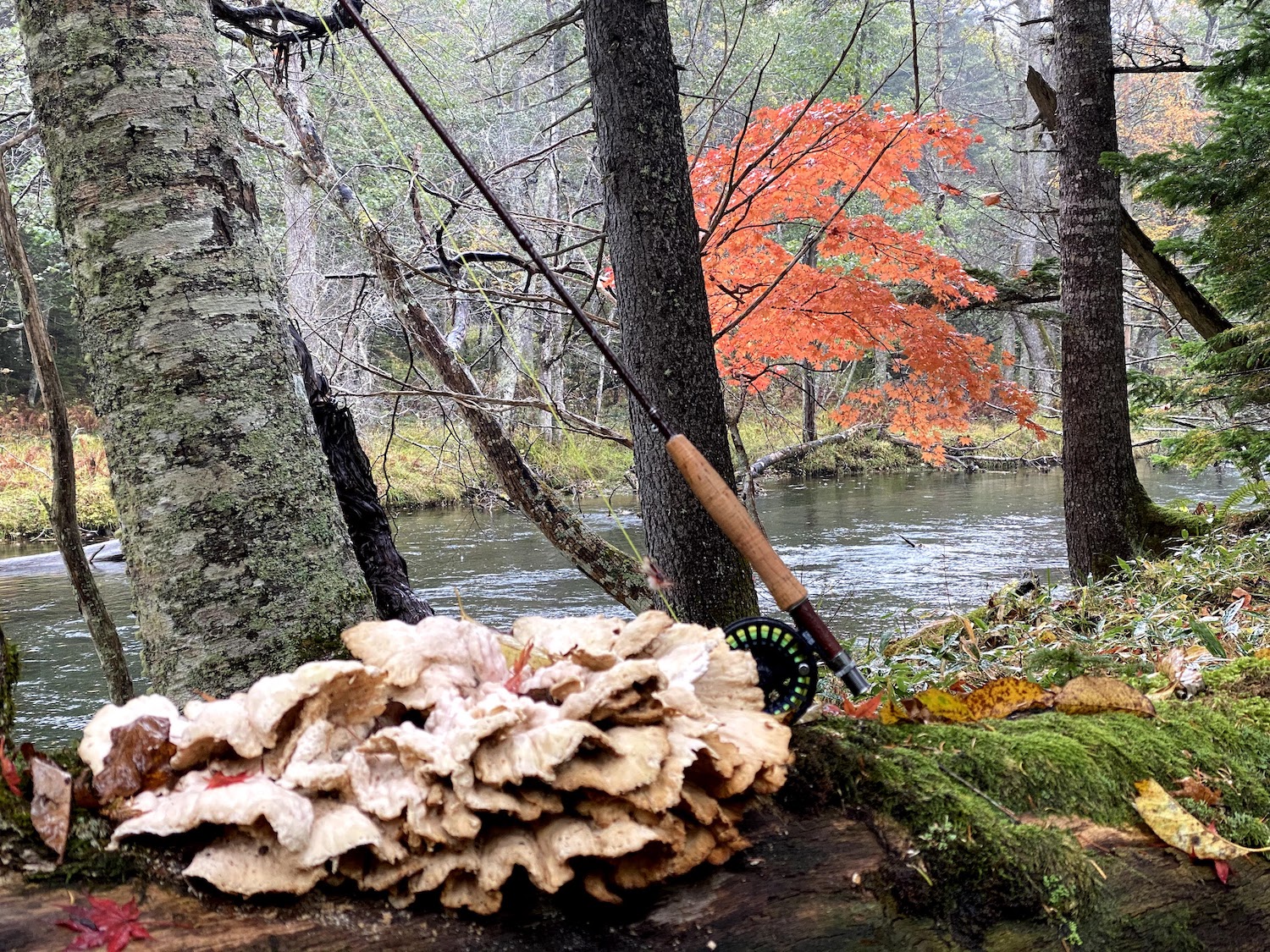 As for the local angler’s reason for not liking to catch fat trout, Pete and I disagreed. So we fished the river. 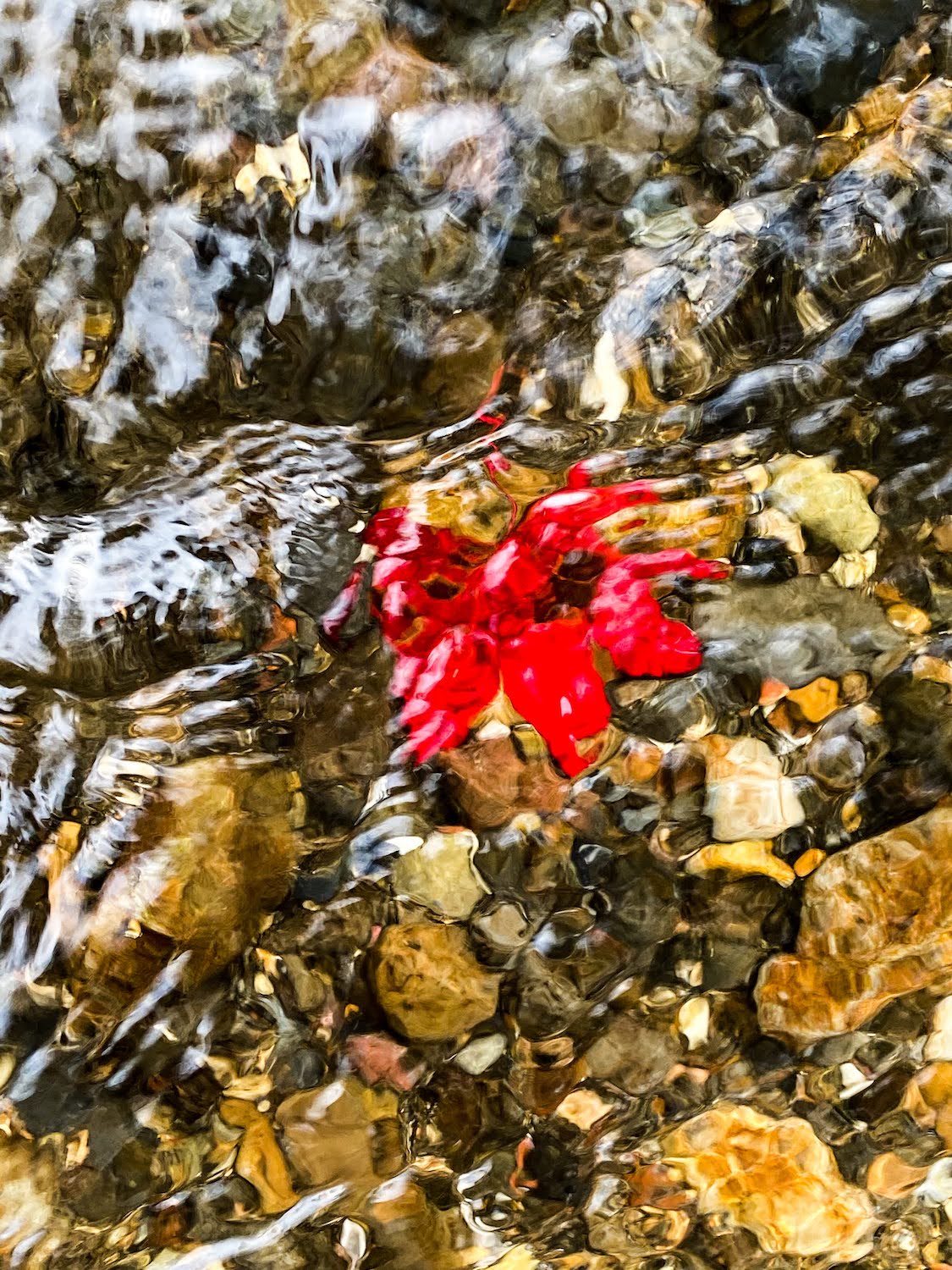 The Akan is a gorgeous river in a gorgeous setting. It narrows and the gradient steepens as you get nearer to its headwaters. The water rushes over and around boulders, and the thick trunks of fallen trees create snags which force undercuts of steep banks. The maple trees that have turned in October are flashes of fire against the dark palette of the water, rocks, and evergreens. 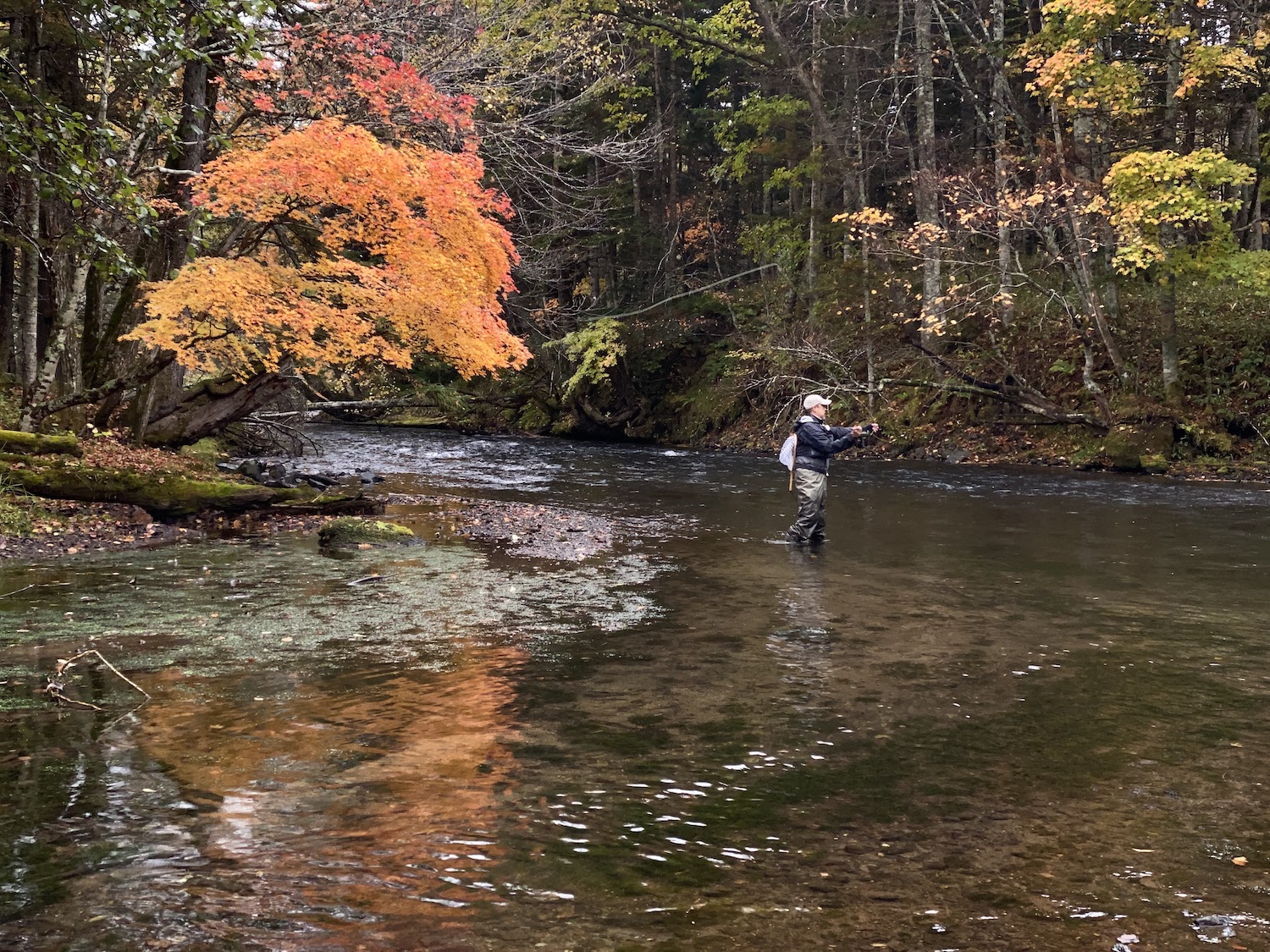 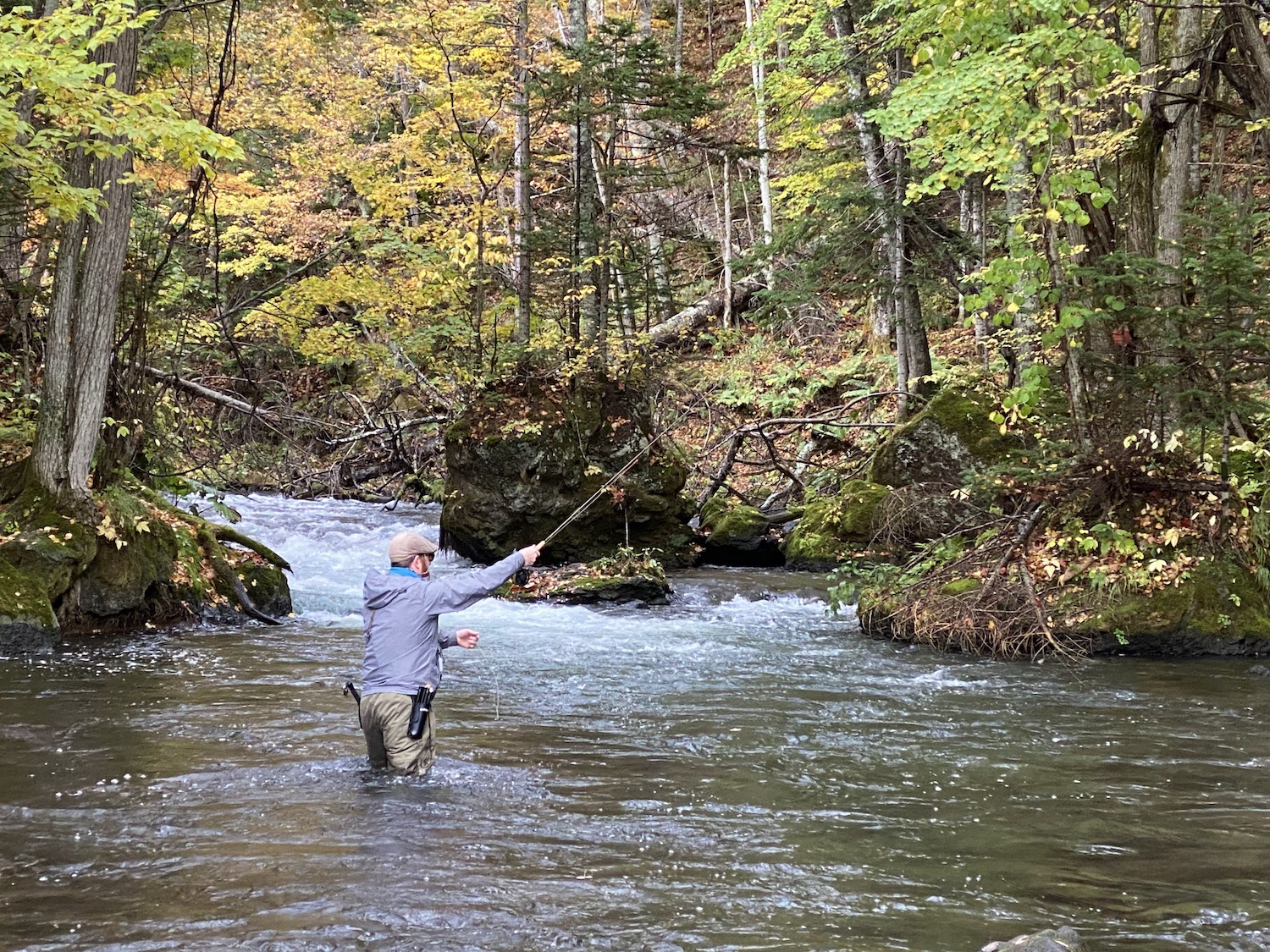 I learned on the Akan that I didn’t know how to fight big trout. The trout of the Akan are muscular, accustomed to the swift flow and perhaps just a bit crazed by the mineral waters. Whatever the reason, whenever Pete or I hooked into a rainbow in the river, we knew we were likely going to be scrambling up and down the river’s edge just to catch a glimpse of the oni—demon—on the end of our line. 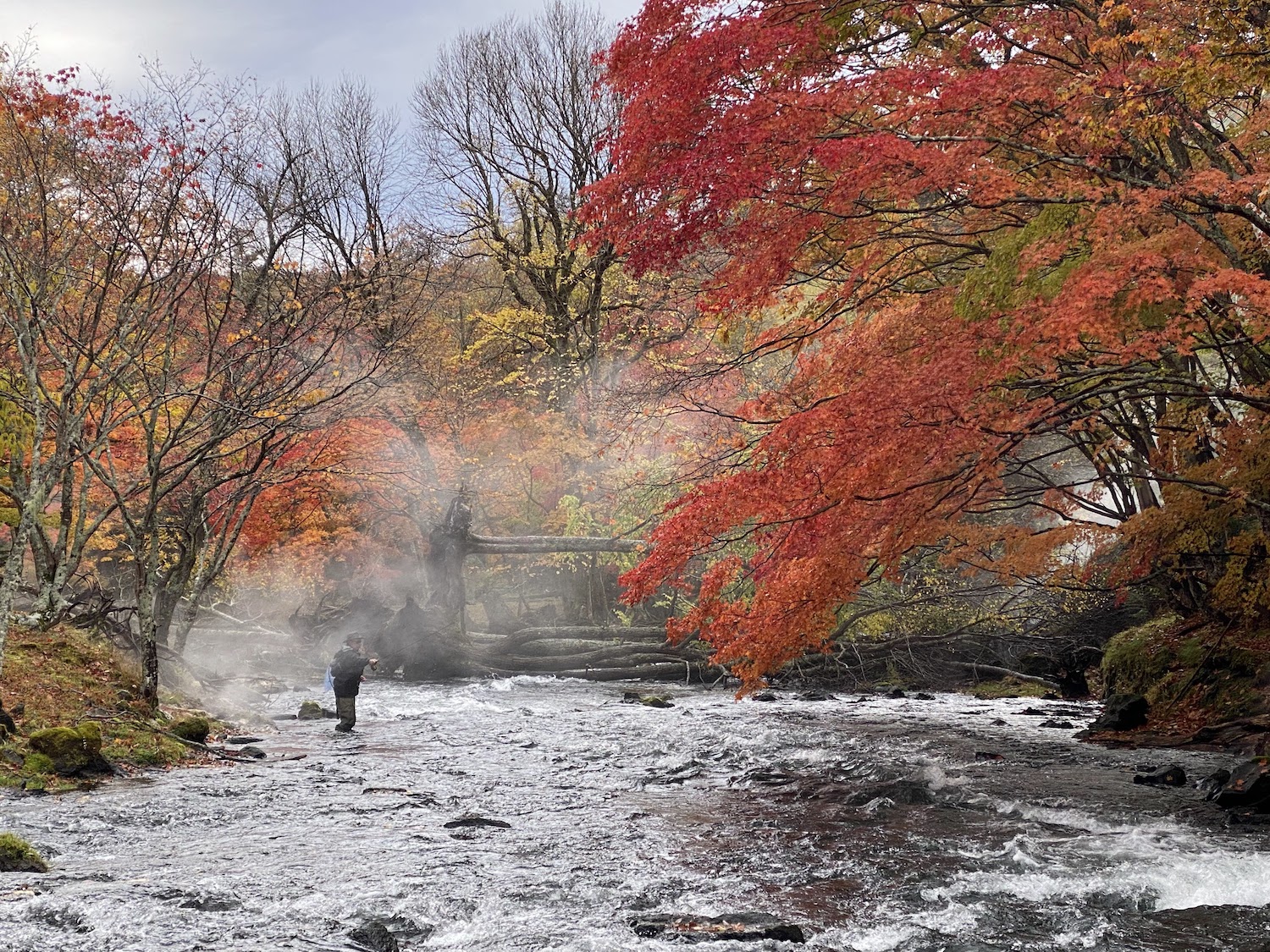 Over the four days, we hooked a lot of big fish. A couple we got to the net, but most we didn’t. Snags, break-offs, dunks into the river, everything that could happen did. But we got a couple of great stories, including what is still my personal best trout (58 cm) and was landed despite my best efforts to lose it. 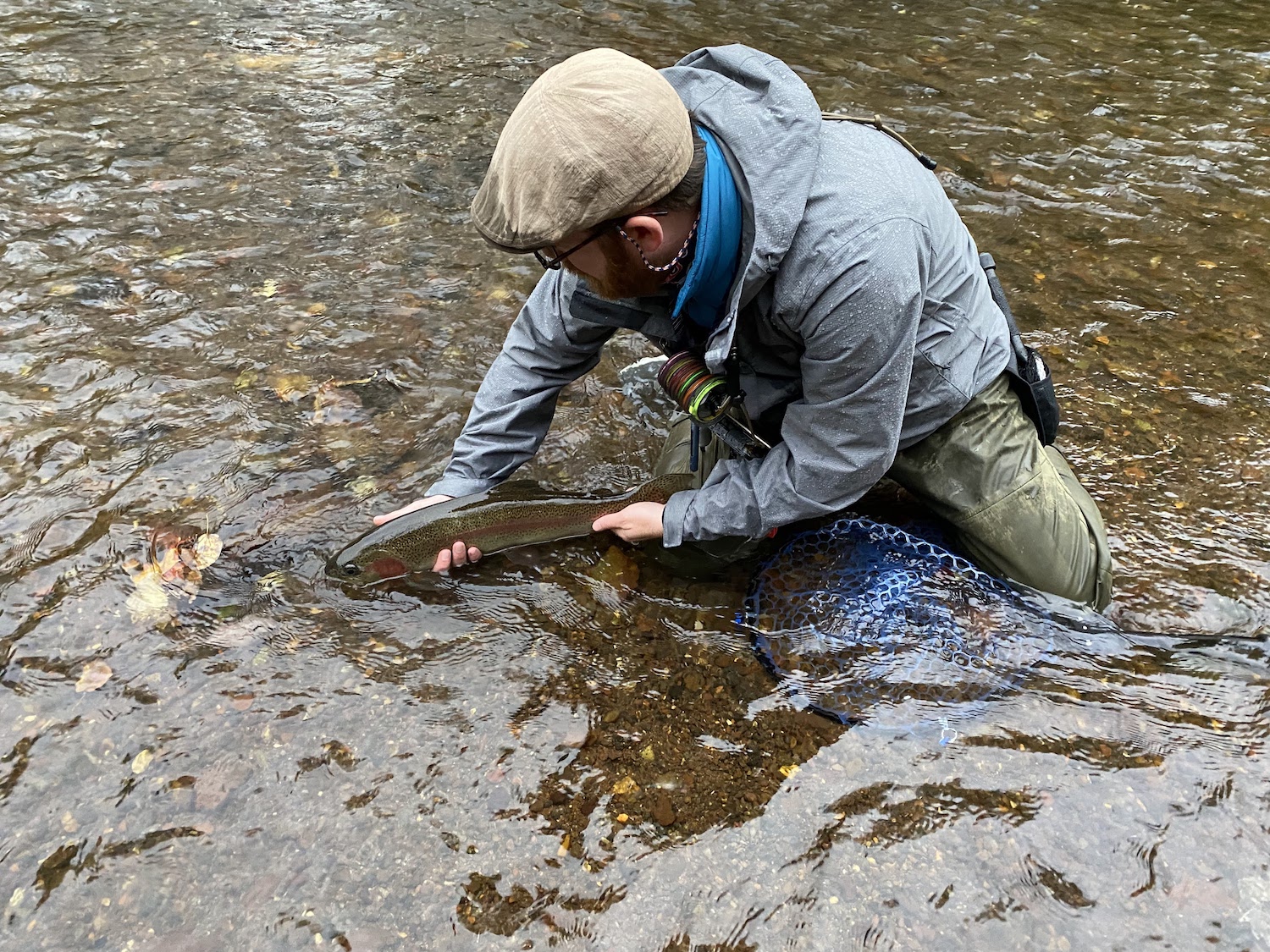 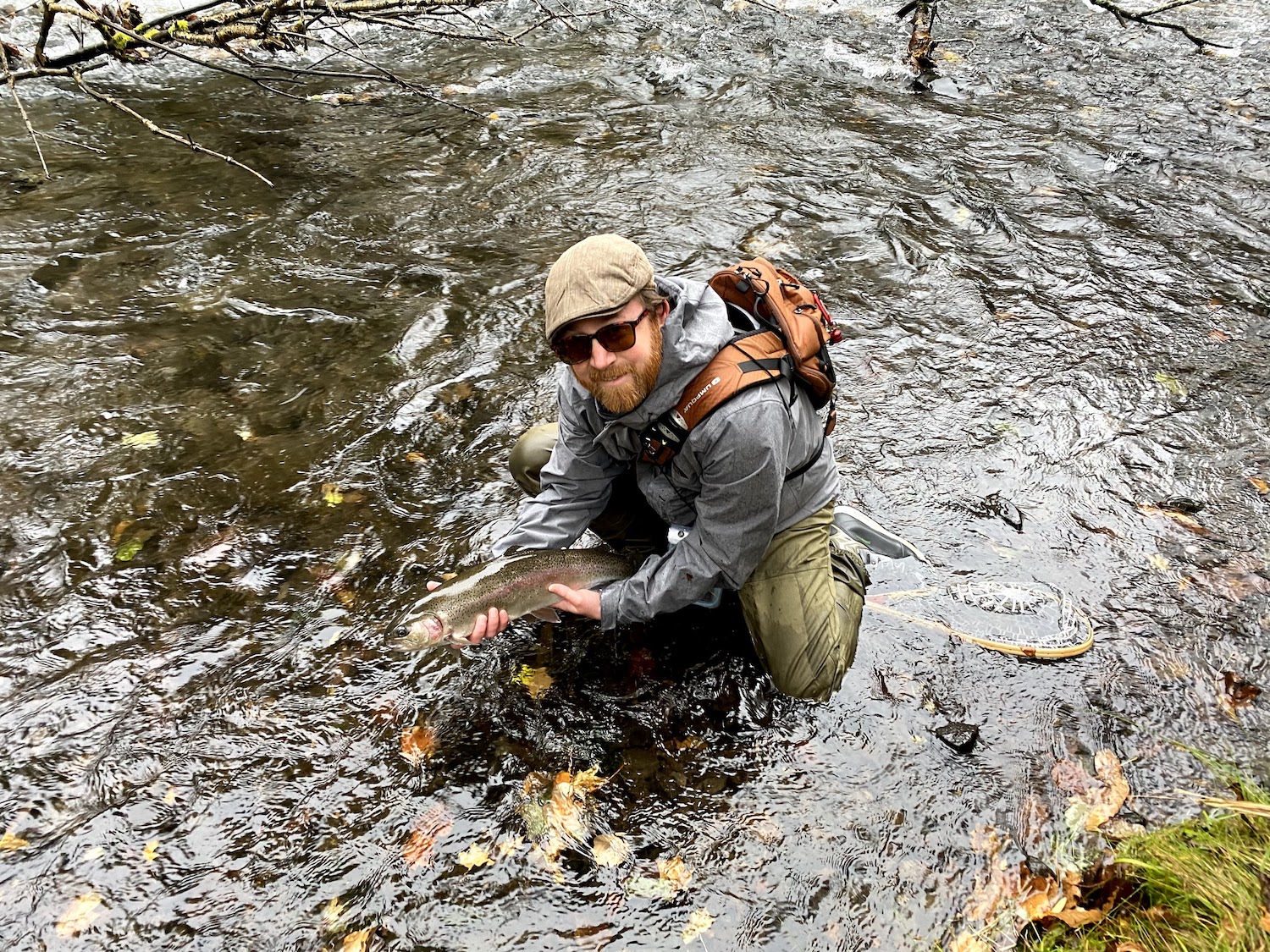 Most importantly, we knew we had a lot to learn, and we knew we were going back. And the following October we did. And that’s another great story. 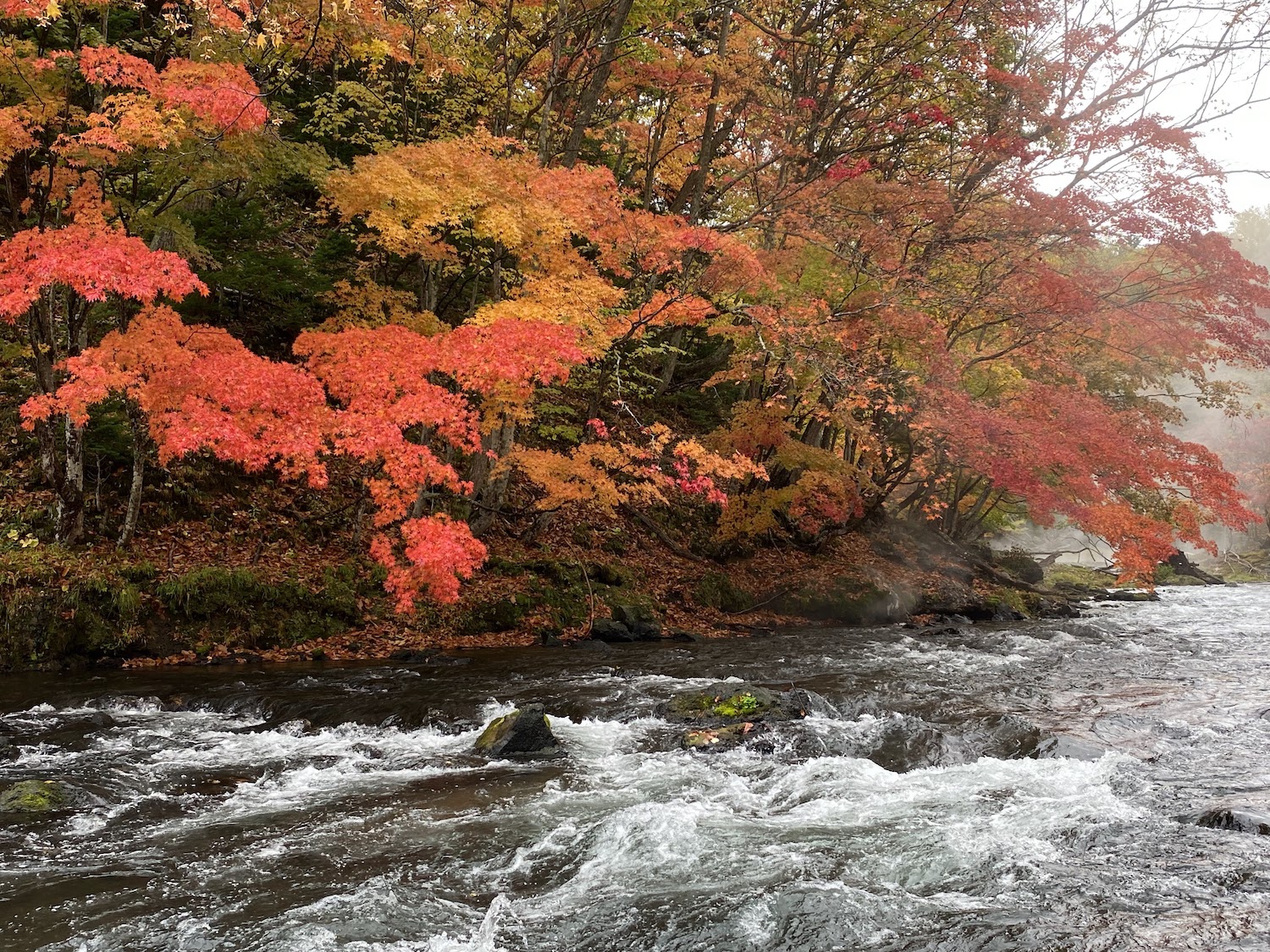