I have come to Katashina region of Japan every season since I moved here. It truly is a magnificent place that offers great fishing and epic scenery only a few hours from Tokyo. The public transit to get here is surprisingly easy too. So, if you have a Japan Rail Pass (and a little knowledge of the bus system) you are all set. 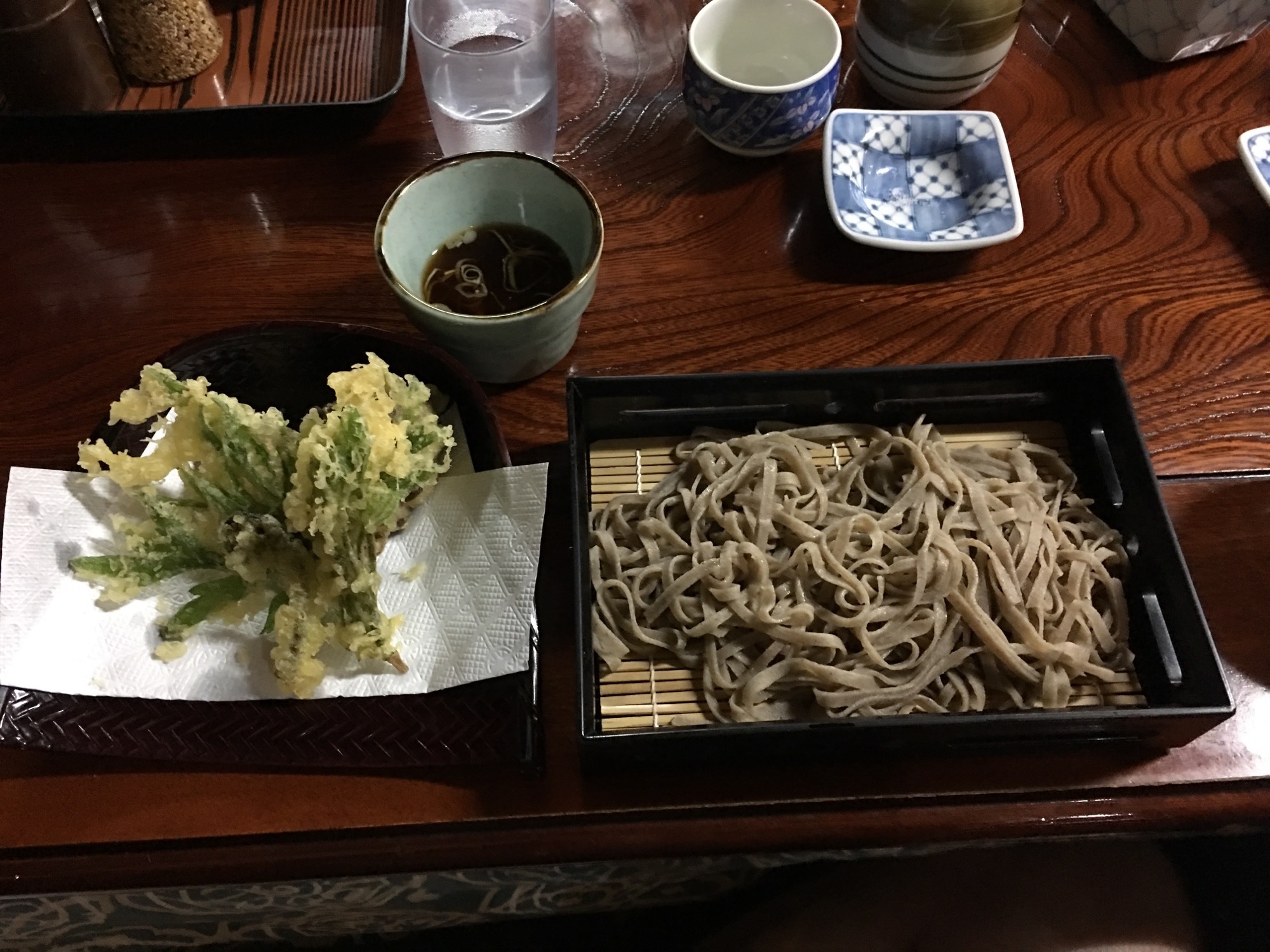 Earlier this month I was fortunate to visit Katashina on two separate trips. The first trip was with Paul and John from Tenkara In Focus. They had spent the past two weeks or so traveling with Go Ishii all over Japan. Much of their trip had been spent gathering content for future Tenkara In Focus episodes. So, they were jonesing for some fishing action, which I was happy to provide. 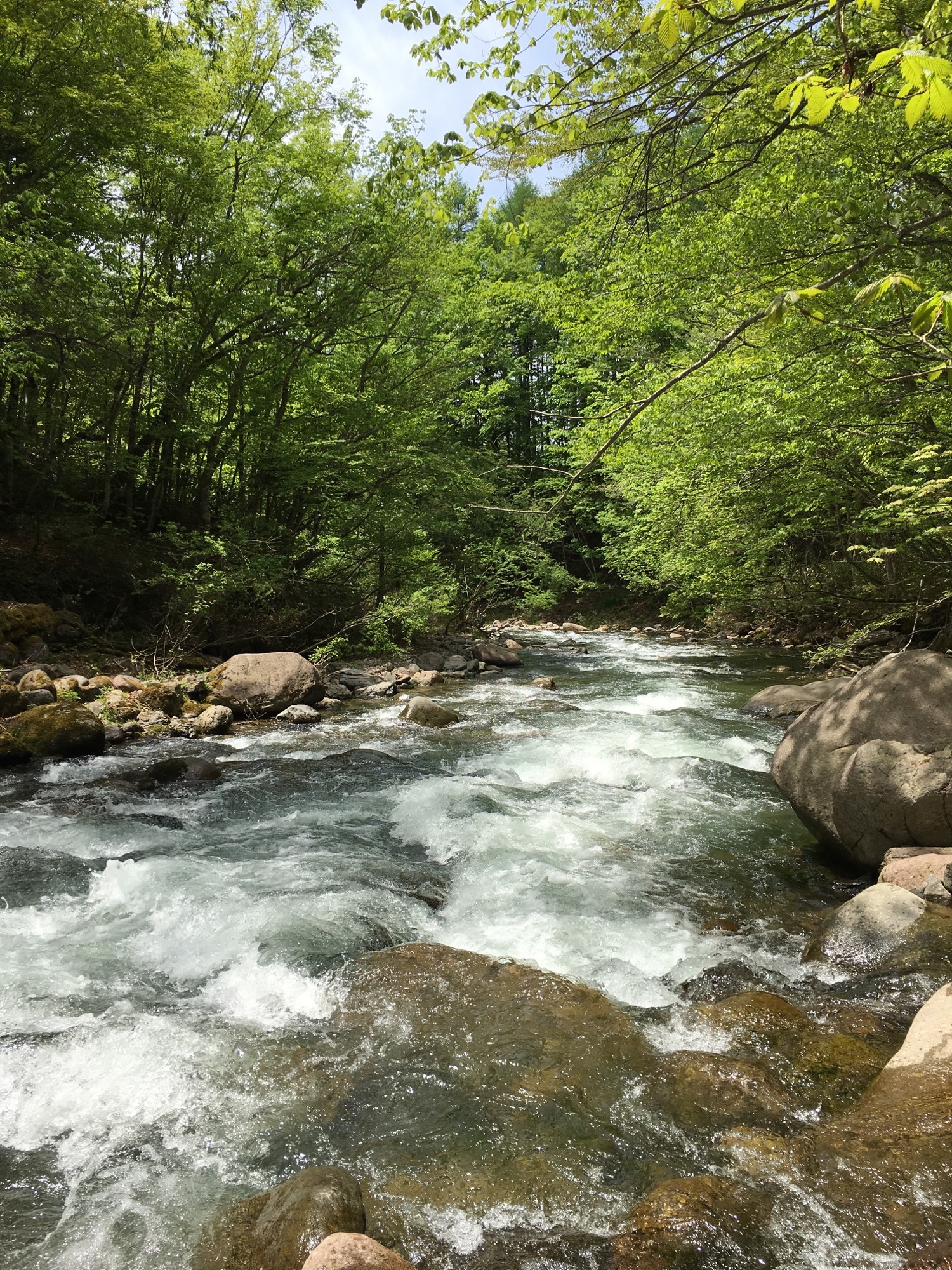 The second visit to Katashina was a few days later when I went to help my friend Kado-san clean out his small cabin. His "cabin" is right in the middle of the village and is actually a three century old refurbished silk factory. While I was there working I did manage to squeeze in two fishing sessions on the highly pressured yet beautiful Ogawa River, which runs right through the middle of town. 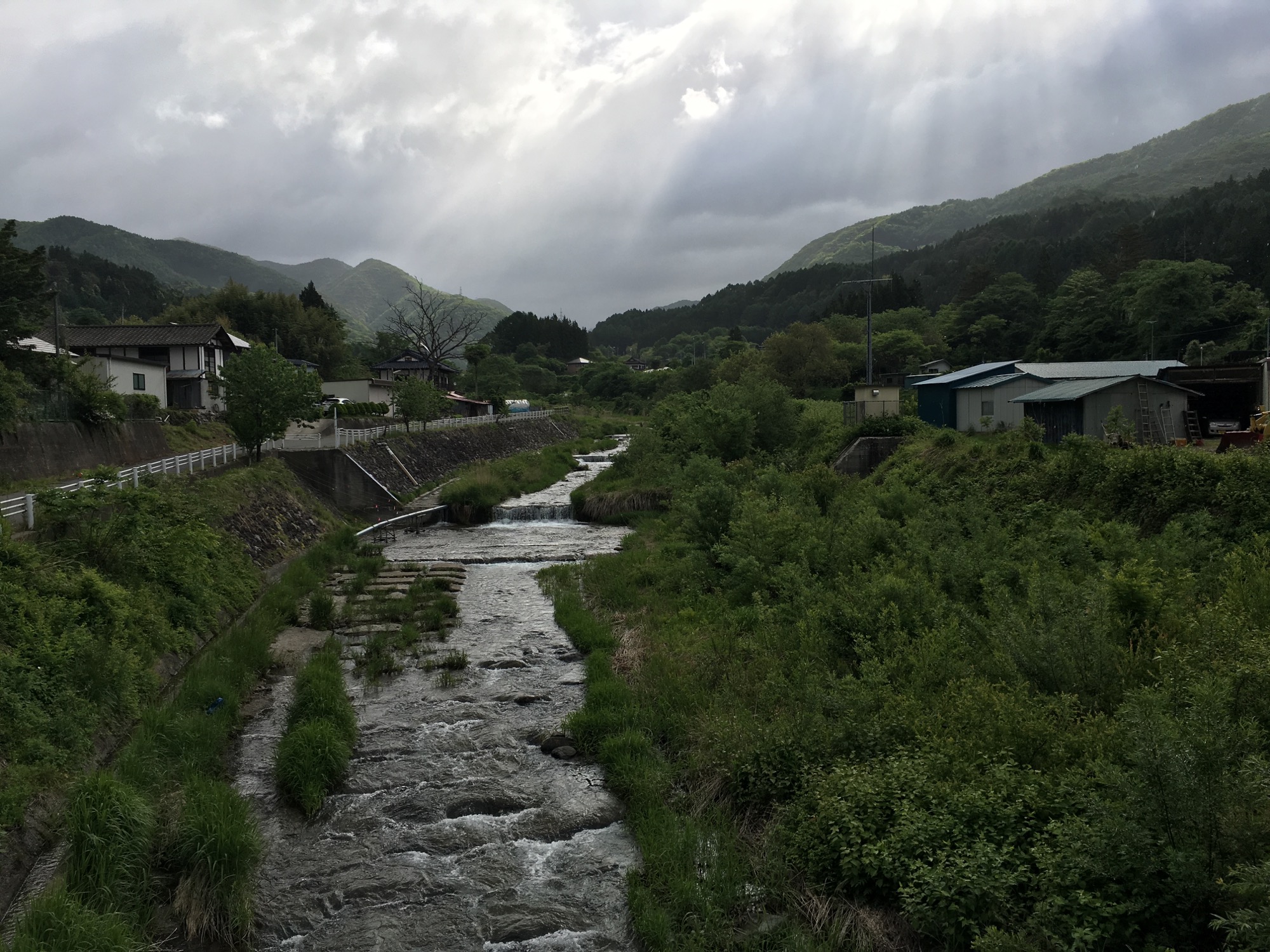 Due to the areas proximity to Tokyo and how many times I have visited the region I thought it would be a good idea to write a feature piece on the area. So, without further ado here it is my first "centerpiece" article on the Katashina region of Japan.

The nearest train station is Numata Station, which is 2.5 hours by shinkansen from Tokyo Station. 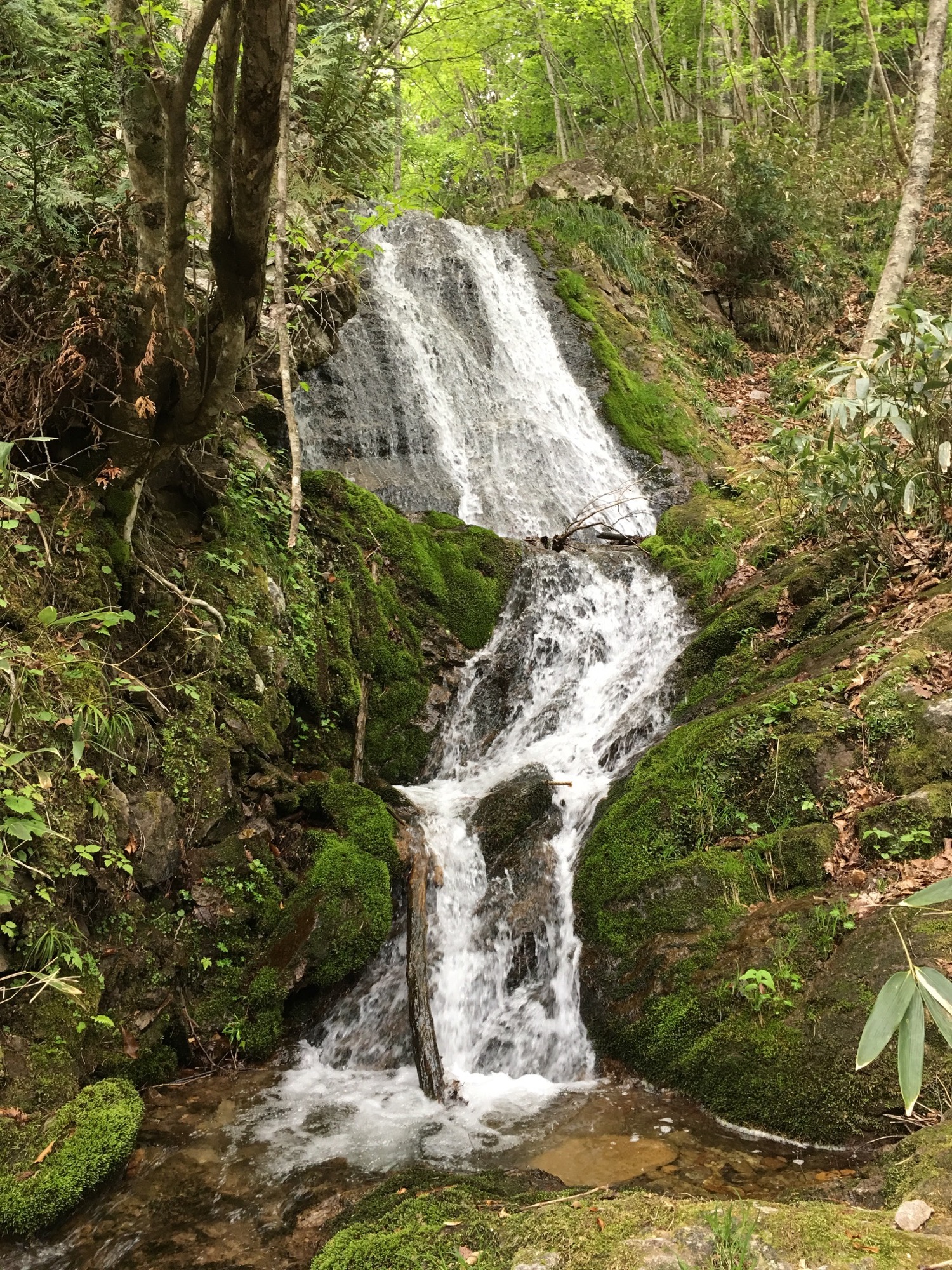 To get to the trail-head for Oze National Park, you will take the bus from Numata Station 沼田 - 群馬県 to the Oshimizu bus stop 大清水 - 群馬県, which takes 1.5 hours and will cost you ¥2,250. 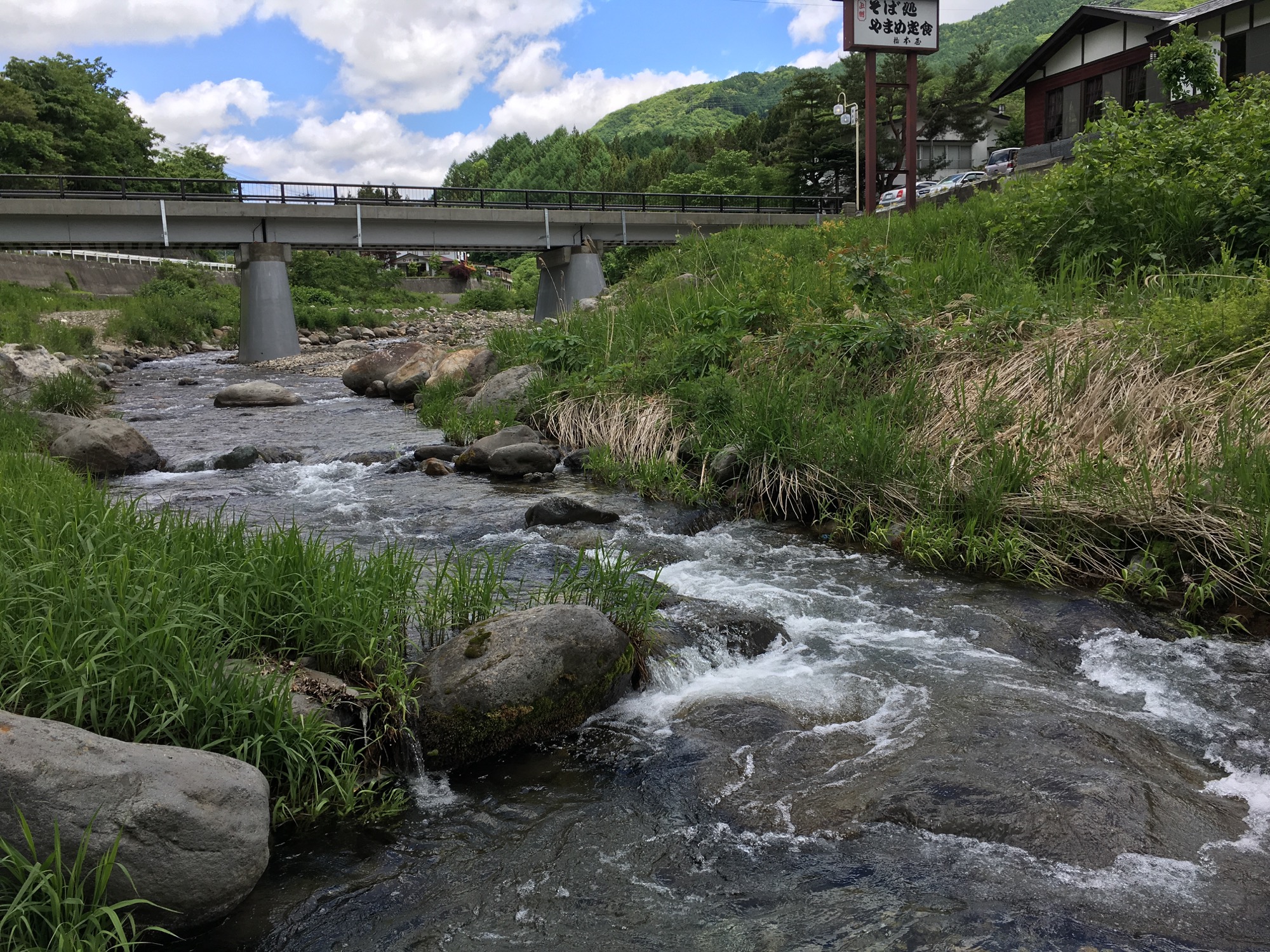 If you want to get off in the village proper of Katashina you should plan to get off the bus early around the 鎌田上 stop. 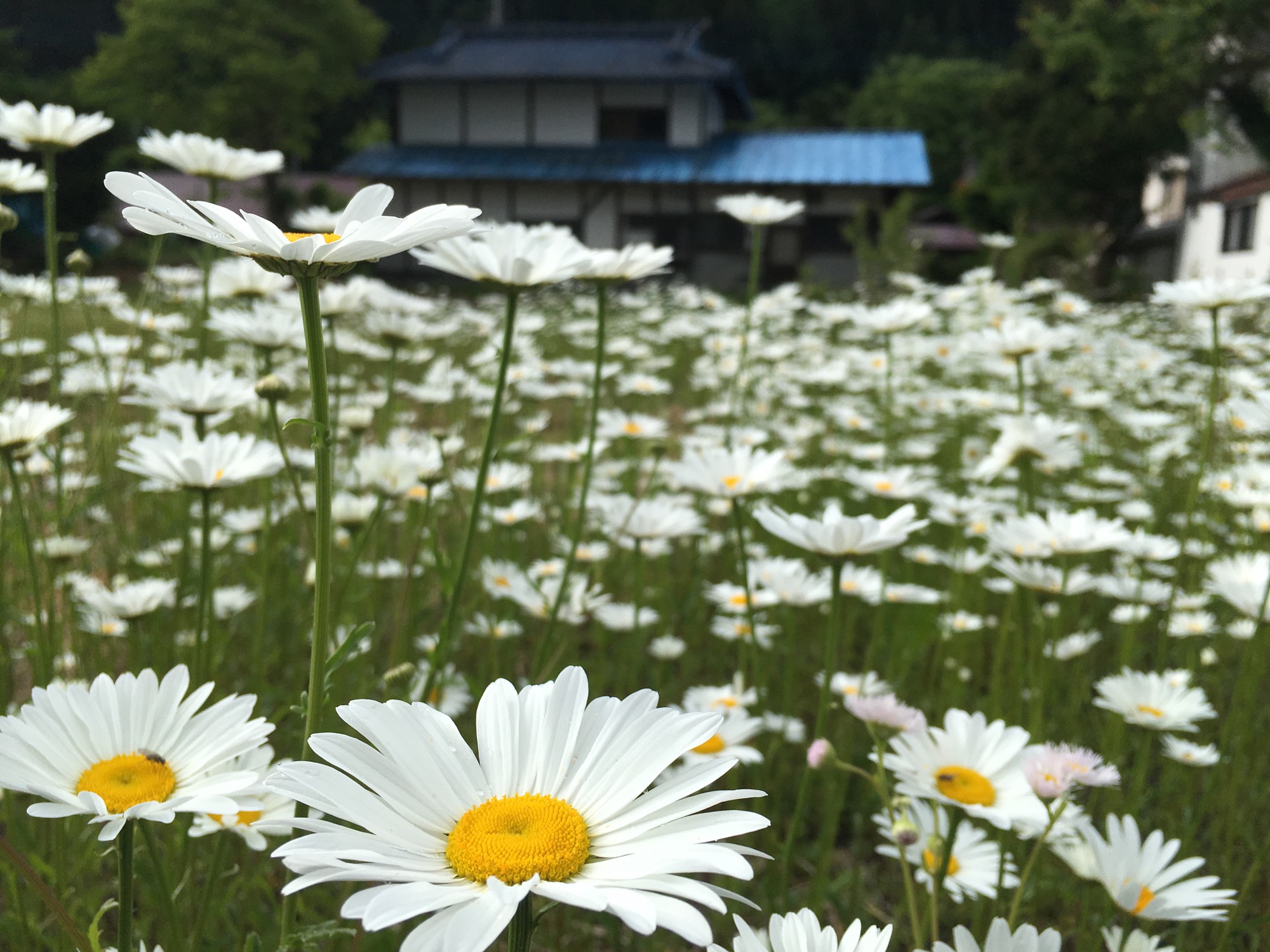 There is plenty of lodging in the village but I prefer to camp. For restaurants and onsens there are several good options (I have only listed the ones I have been to).

For further research see the other articles I have written about in this area: 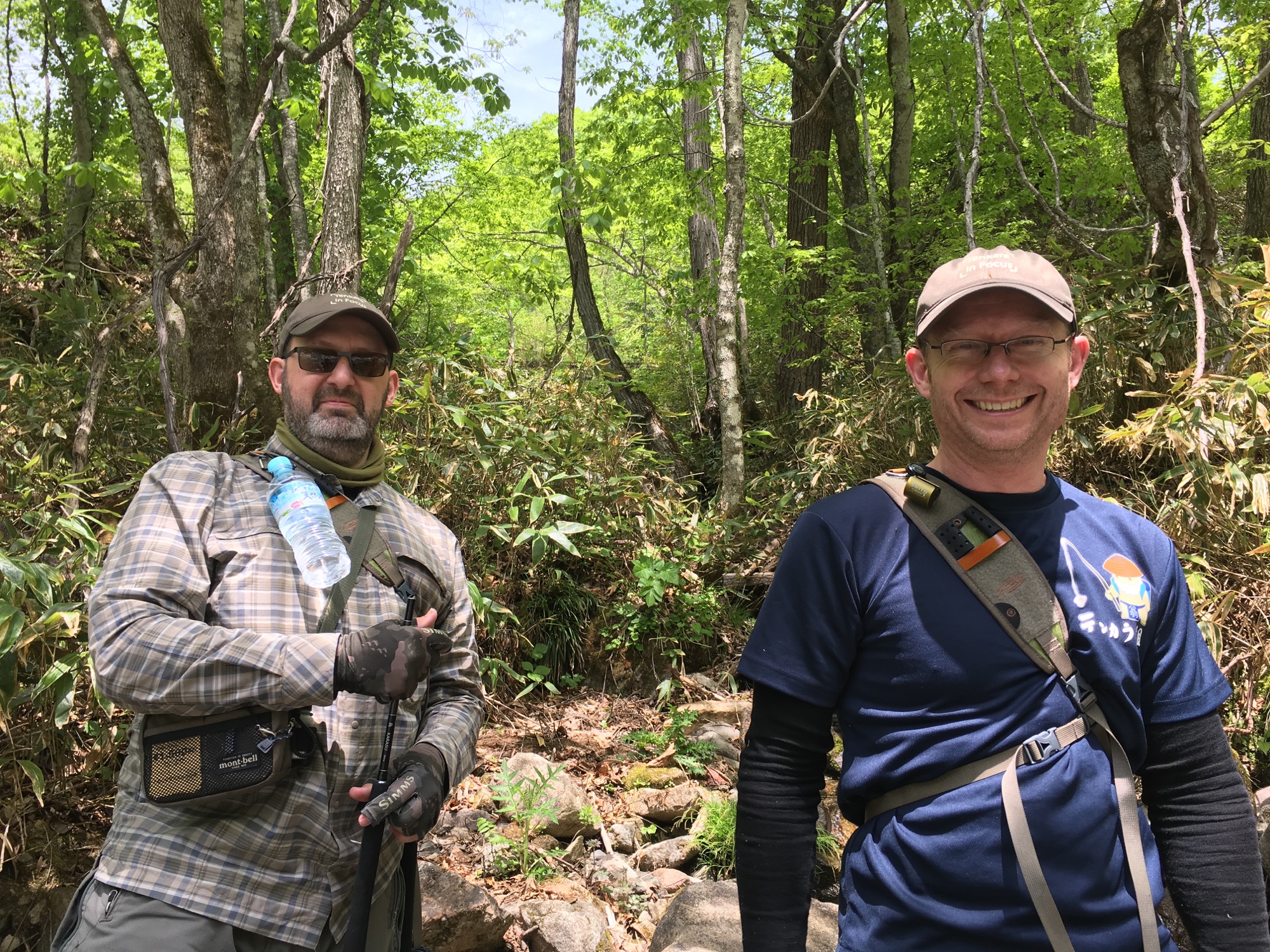 When I heard that Paul and John were planning another trip to Japan I was excited to link up with them. Due to schedule conflicts and last minute change in plans it looked liked I might miss them again. Then I got a Line message from Go Ishii asking if I could take Paul and John on a private tour on May 31st since he had some stuff to take care of in town. I was happy to oblige and so we made plans to meet in the Numata area where I would take Paul and John on a Tenkara adventure. 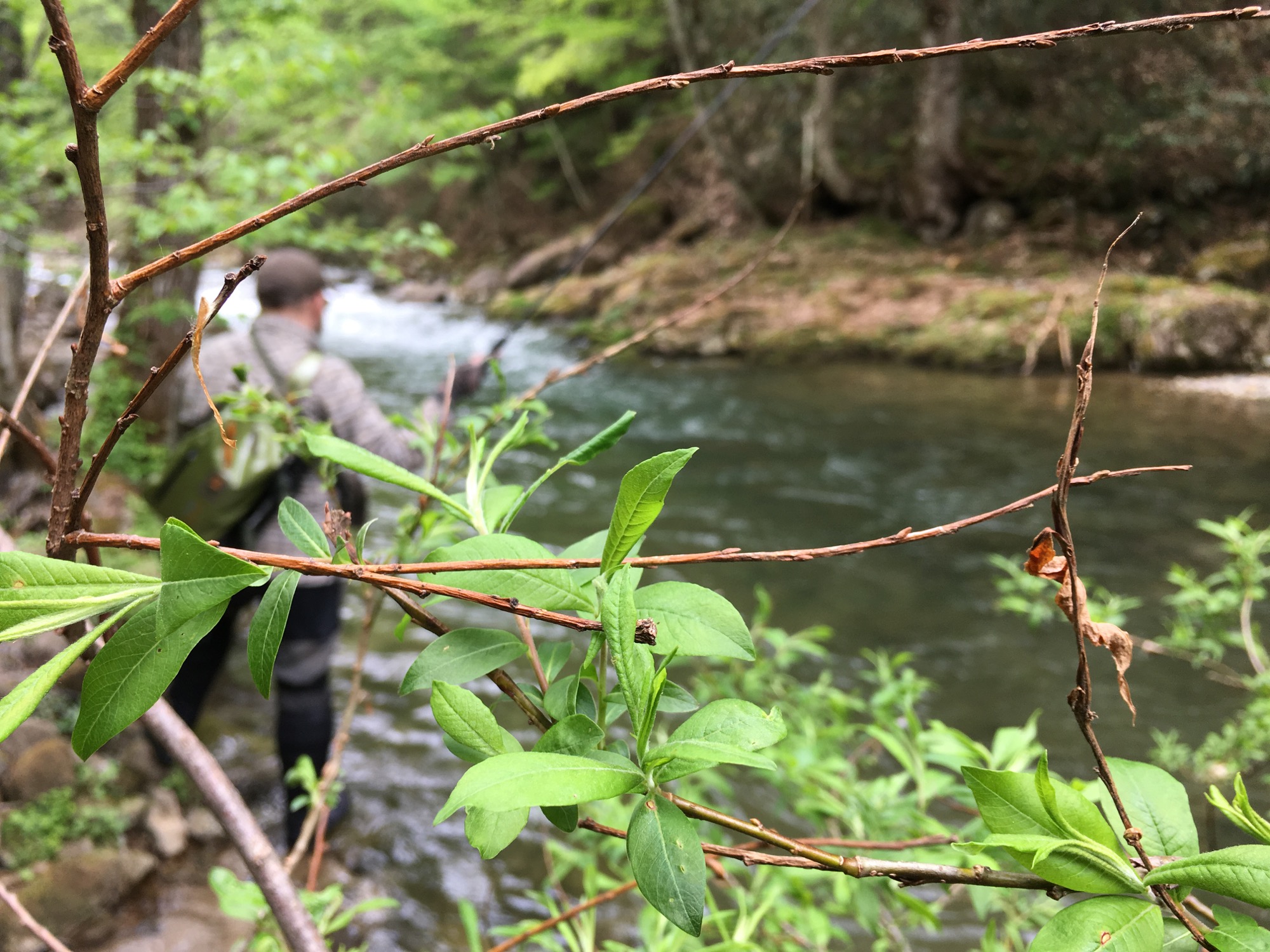 I got on the road early to beat the traffic going through Tokyo and consequently I arrived in Numata several hours before the scheduled meeting time. I tried to sleep in my car but I was too excited (and a little nervous too) for the days adventures. Thanks to Go's race car driving ways Paul and John arrived early though, and after a brief discussion in the parking lot of Lawsons Paul and John piled in my van and Go headed back home to Tokyo. 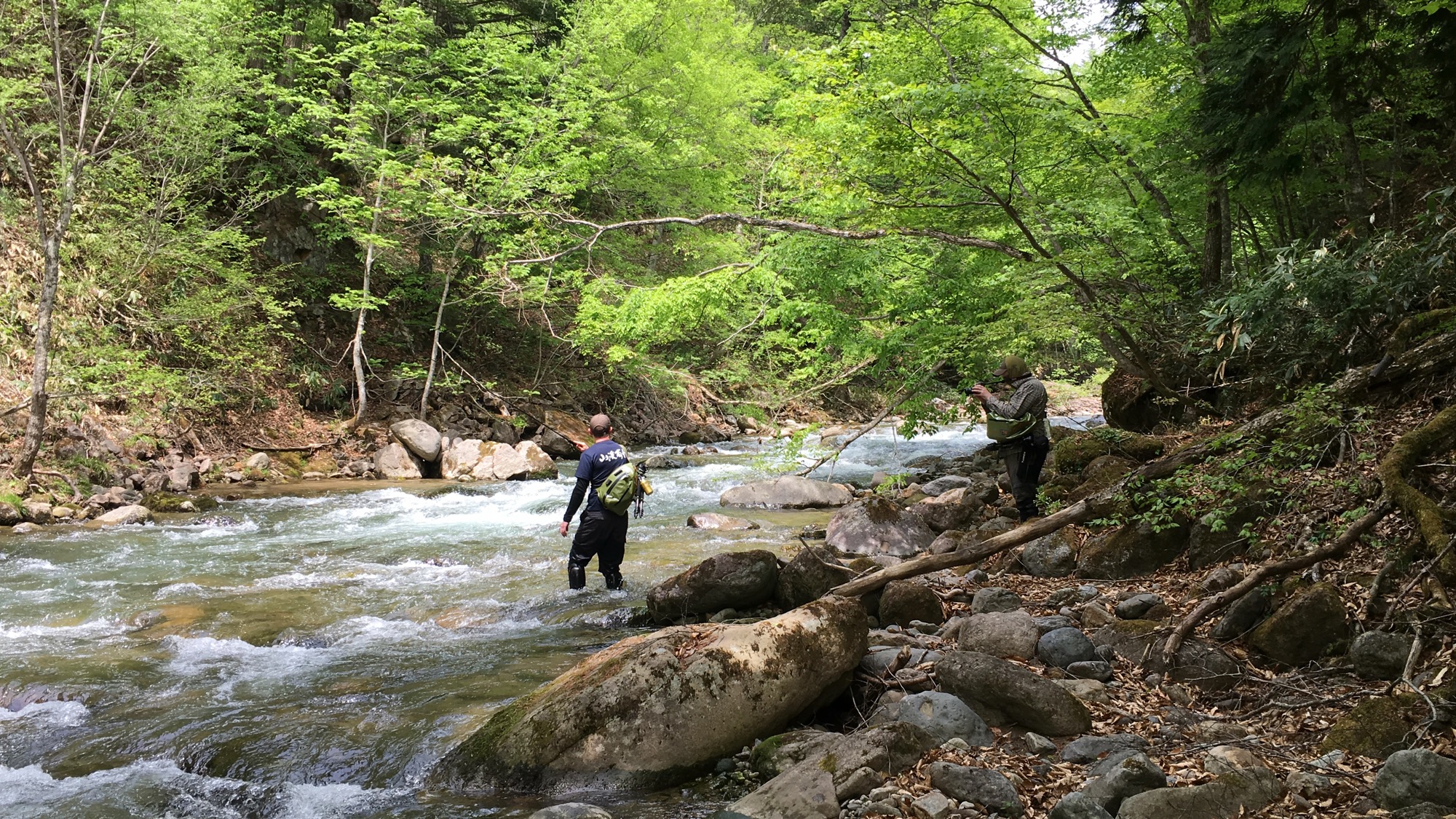 On the drive to the "trail-head" the three of us chatted about all manner of topics mostly pertaining to Tenkara. We laughed, joked, and discussed plans for the day. The one hour drive passed quickly and before we knew it we were parked at the trail-head donning our wet wading gear. It was a warm day and after a 30 minute walk in the woods it was refreshing to plunge into the snow melt fed stream. John and Paul fished for a while and I watched - I live in Japan so I was happy to let them take point. The scenery was spectacular and I kept myself busy snapping photos and shooting some video. 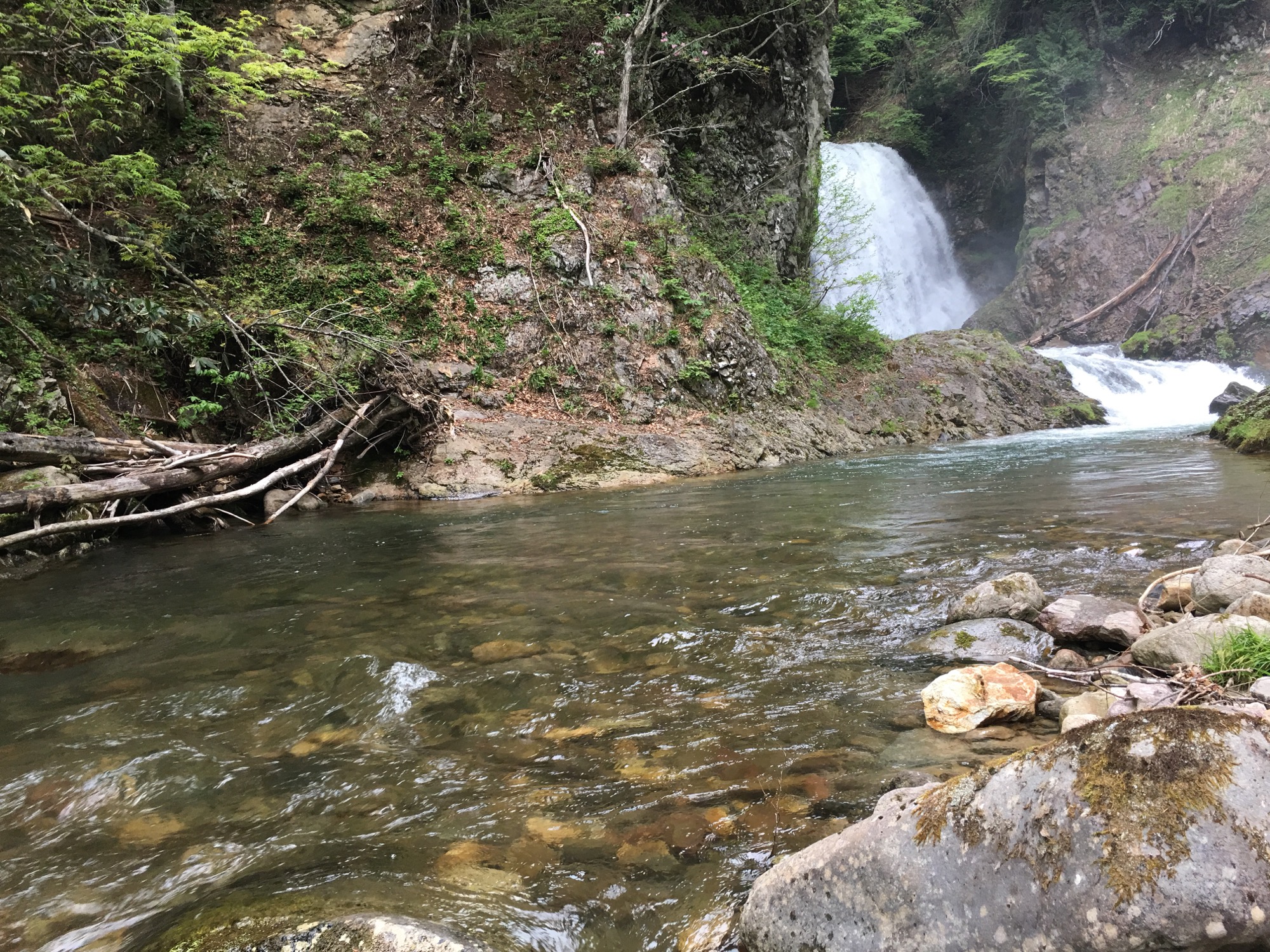 After six hours or so of fishing we packed up our rods and hiked upstream to the waterfall. It was starting to get late and we had not covered as much ground as we had planned because the fishing had been too good (it is a rough problem to have). When we arrived at the waterfall Paul and John setup their cameras to shoot some videos. As we were preparing for a final group photo I noticed that the water had suddenly become quite murky. Fearing an impending flood and realizing we were on the wrong side of the river, we quickly packed up. In the minute or two it took to put the cameras away the water had turned to the color of chocolate milk and had risen about 30 cm (one foot)! We plunged into the river, which was now above our waists. Thankfully we were able to safely make it to the other side. However, the only way back to the car was to climb up a 30 meter cliff. We took our time climbing occasionally looking down at the flooding river and in short order we were standing at the top looking at the flooding river far below.

The flood was strange as we saw no debris floating downstream at the onset and it did not appear to be raining upstream. It was a warm day so it must have just been snow flash melting really late in the day. Whatever the cause it was exciting and a good reminder to respect the mountains. 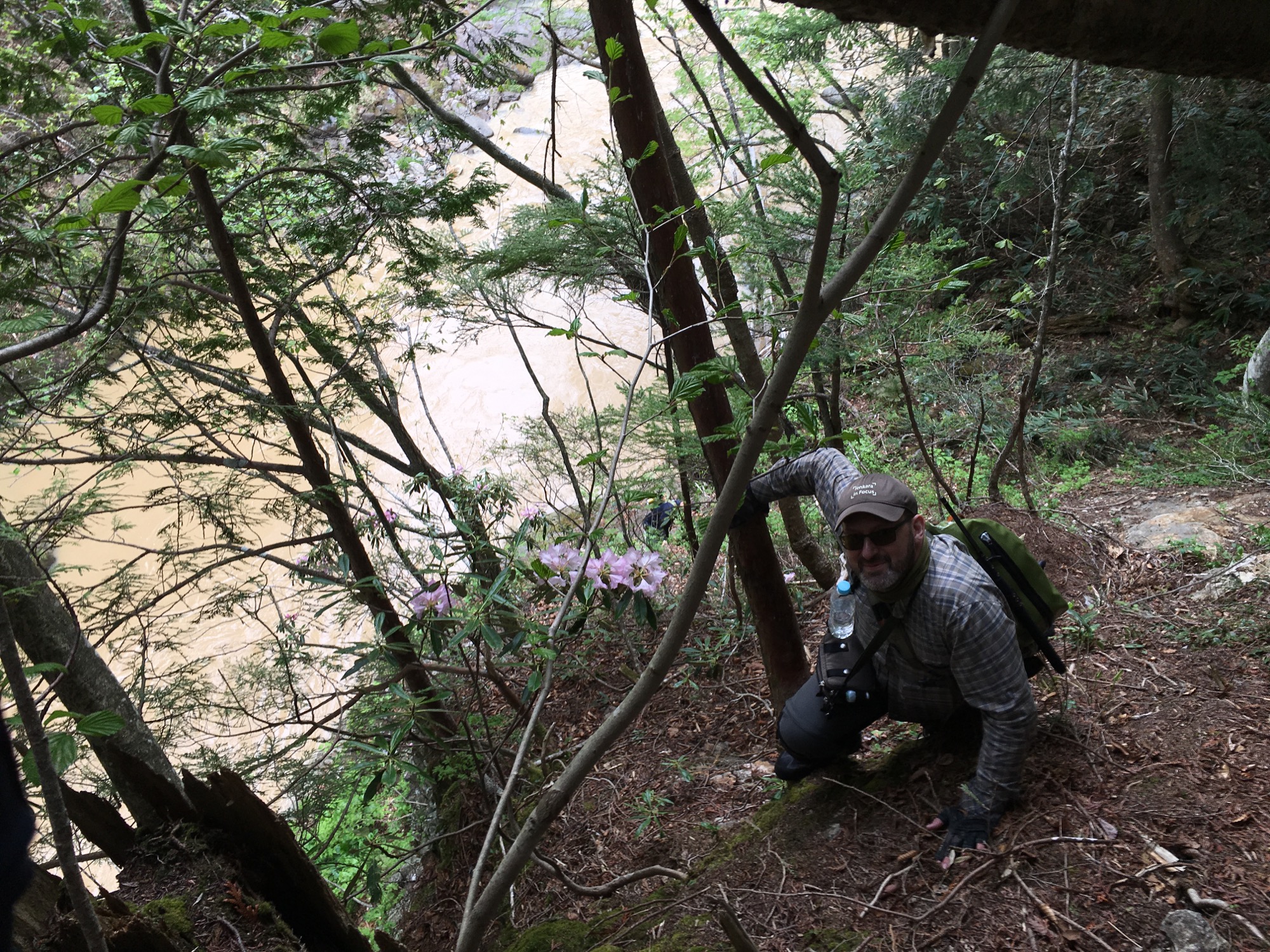 That night we dined on some fabulous soba and delicious tempura at the famous そば源 restaurant. If you find yourself in Numata I highly recommend this place. Come hungry, their menu is quite substantial. After a long drive I got John and Paul to their hotel in Kawaguchi around midnight. After helping them with their luggage I bought a coffee from a vending machine and drove home arriving a little after 1am, just in time to feed my son his midnight bottle. 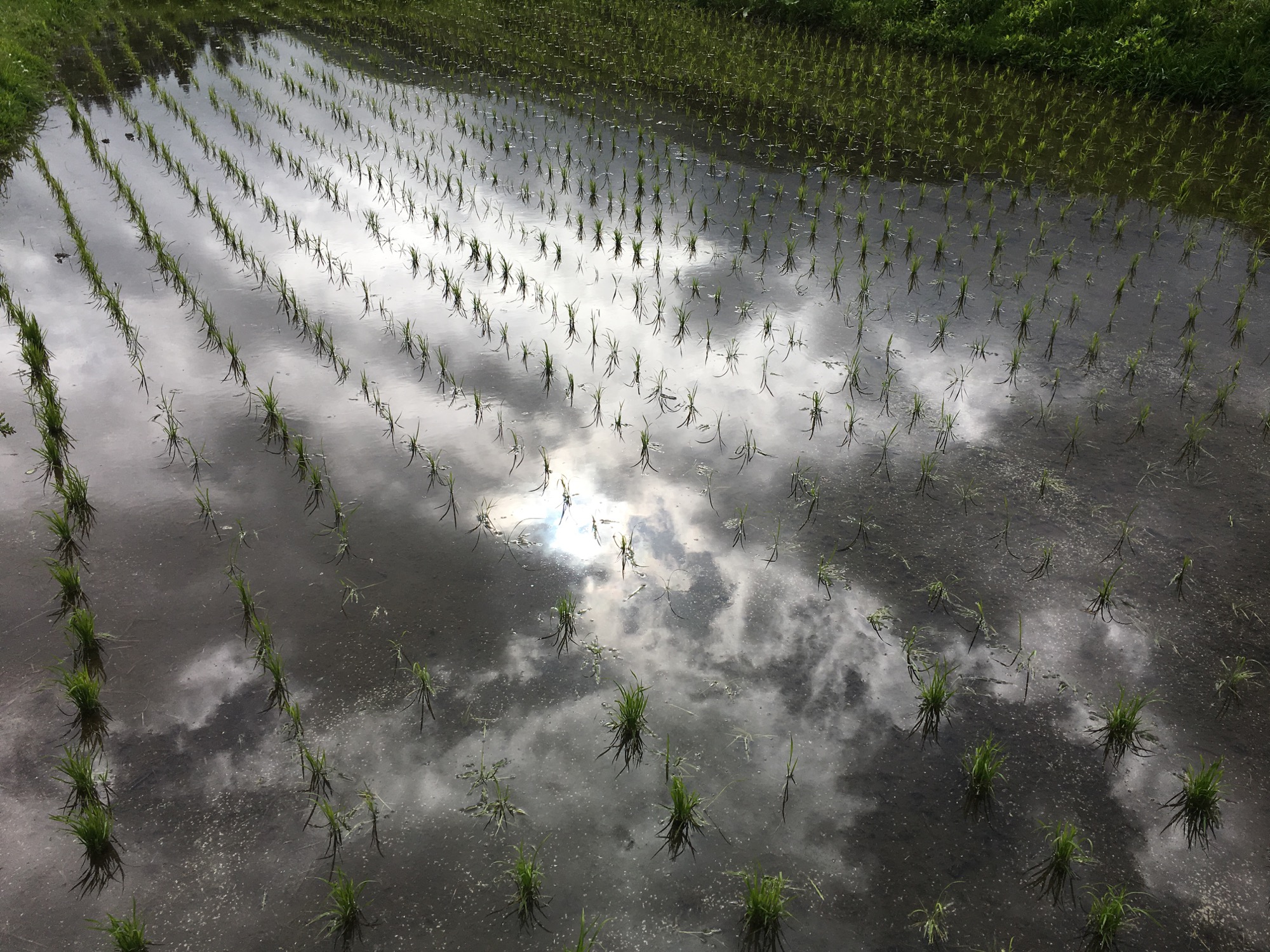 When I first came to Japan one of my very first Tenkara trips was to Katashina with my friend Kado-san. We fished several rivers and at night we slept in his "cabin". So, when he mentioned that he need some help cleaning out some old ski equipment from the attic I was more than happy to offer my services. The neighborhood around his "cabin" is quite picturesque and the river is beautiful. 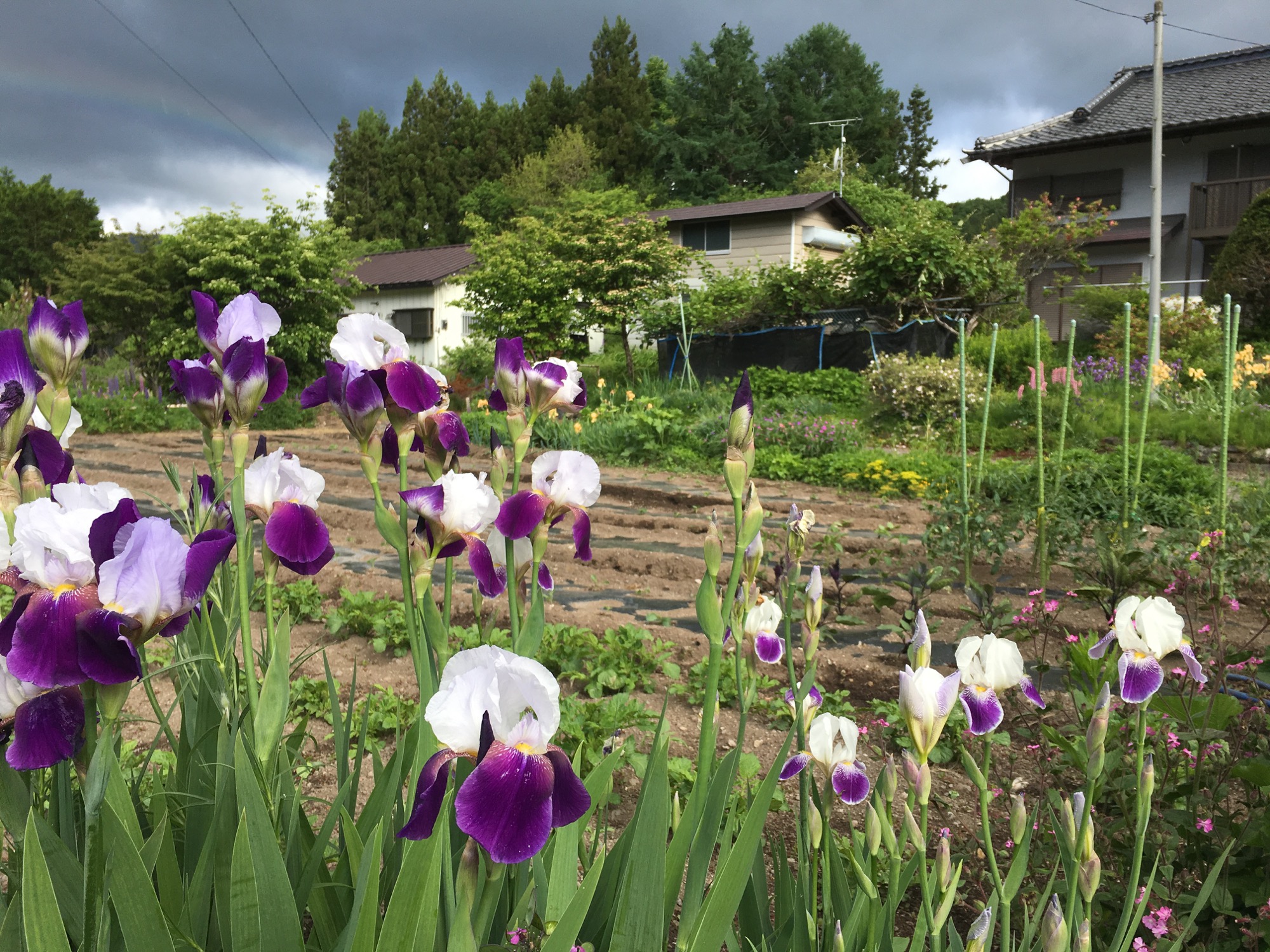 There are two rivers that run through Katashina, the Ogawa and the Katashinagawa. The Ogawa is a shorter river and its headwaters are in a more populated area, therefore it sees more pressure and does not feel as remote. Over the weekend I did see a lot of fishermen on the Ogawa and due to the lack of C&R fishing ethic in Japan (a fact that I find almost as frustrating as their penchant for building dams) there was not many fish in the river. However, I did get very lucky and brought to hand quite possibly the largest fish in the river! She put up quite a fight, putting a nice bend in my Tenryu Furaibo TF39TA, and even took me for a run! 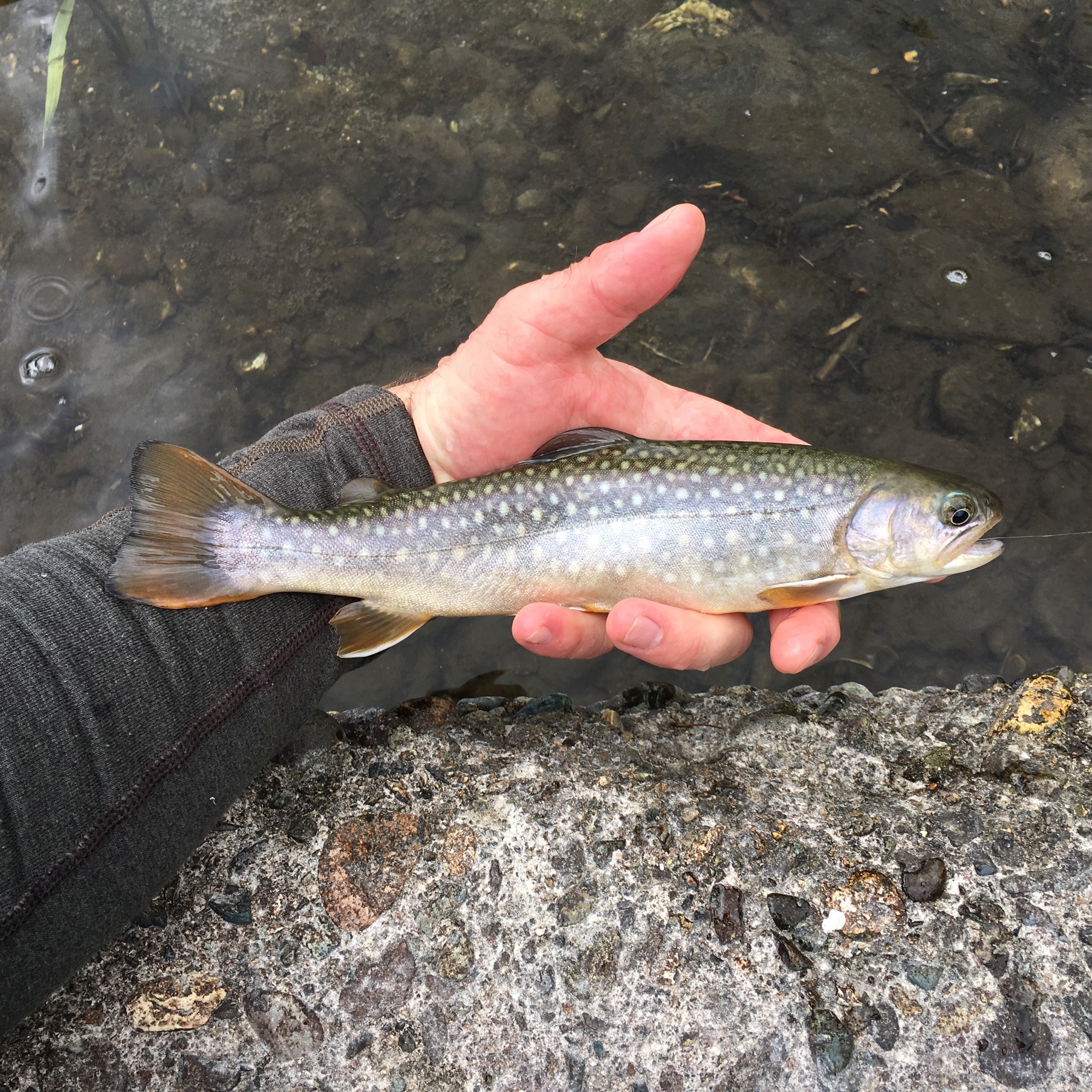 While the Ogawa is not really a destination river if you are in town and have a few hours free it does offer some fun fishing. And who knows maybe you will get lucky and catch 'big bertha'.

If you are planning a visit to Tokyo and want to do some hiking and fishing Katashina is hard to beat. The locals are very friendly and the public transportation is easy and frequent. There are several ski resorts in the area too and even some great backcountry skiing so this area is literally a four season destination.

A Katashina tourism brochure from 1996. 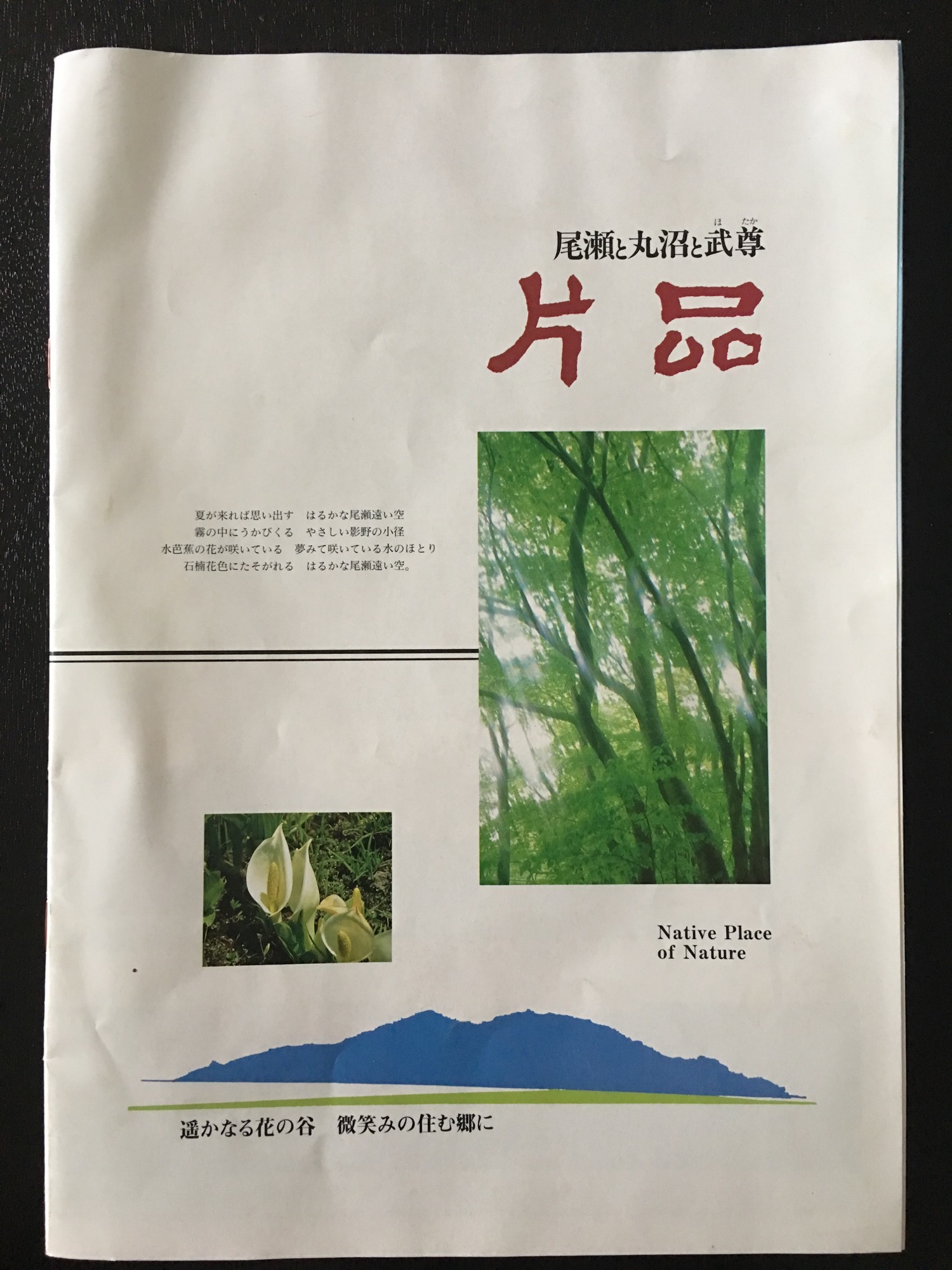 Click the page numbers below to read the rest of the brochure.