On the western flank of Mount Naeba there are twelve tiny villages that are tucked into a rugged and remote valley. The area is known as Akiyamago. Even though it is fairly close to Tokyo the area does not see a lot of pressure. To add even more allure to the region there are numerous rivers in the area so finding solitude is fairly easy. 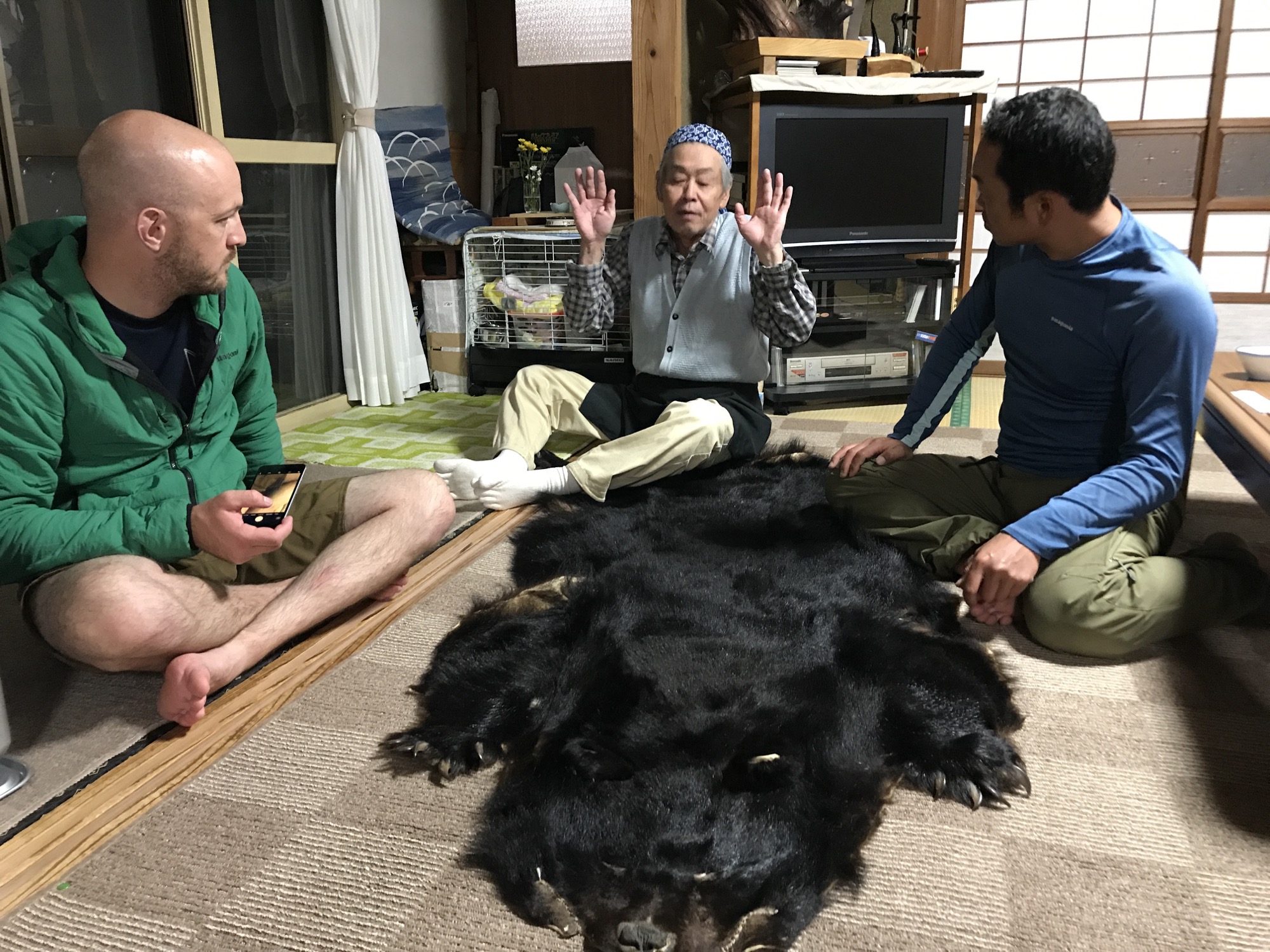 You can buy a fishing ticket at Yamada-san's minshuku here (or the famous Kiriake Hot Springs if he isn't home). The tickets cost ¥500 for the upper canyon and ¥800 for the lower canyon per day. It is important to buy the fishing ticket beforehand as several of the rivers in the area are closed to fishing (you get a free map when purchasing a fishing ticket that show the closed rivers). Last year two fishermen were caught fishing a closed stream. They had kept 25 fish (sadly the removal of exorbitant amount of fish is very common in Japan), consequently they were fined over ¥3,000,000 ($30,000.00)!! So make sure you are fishing in the right spot. 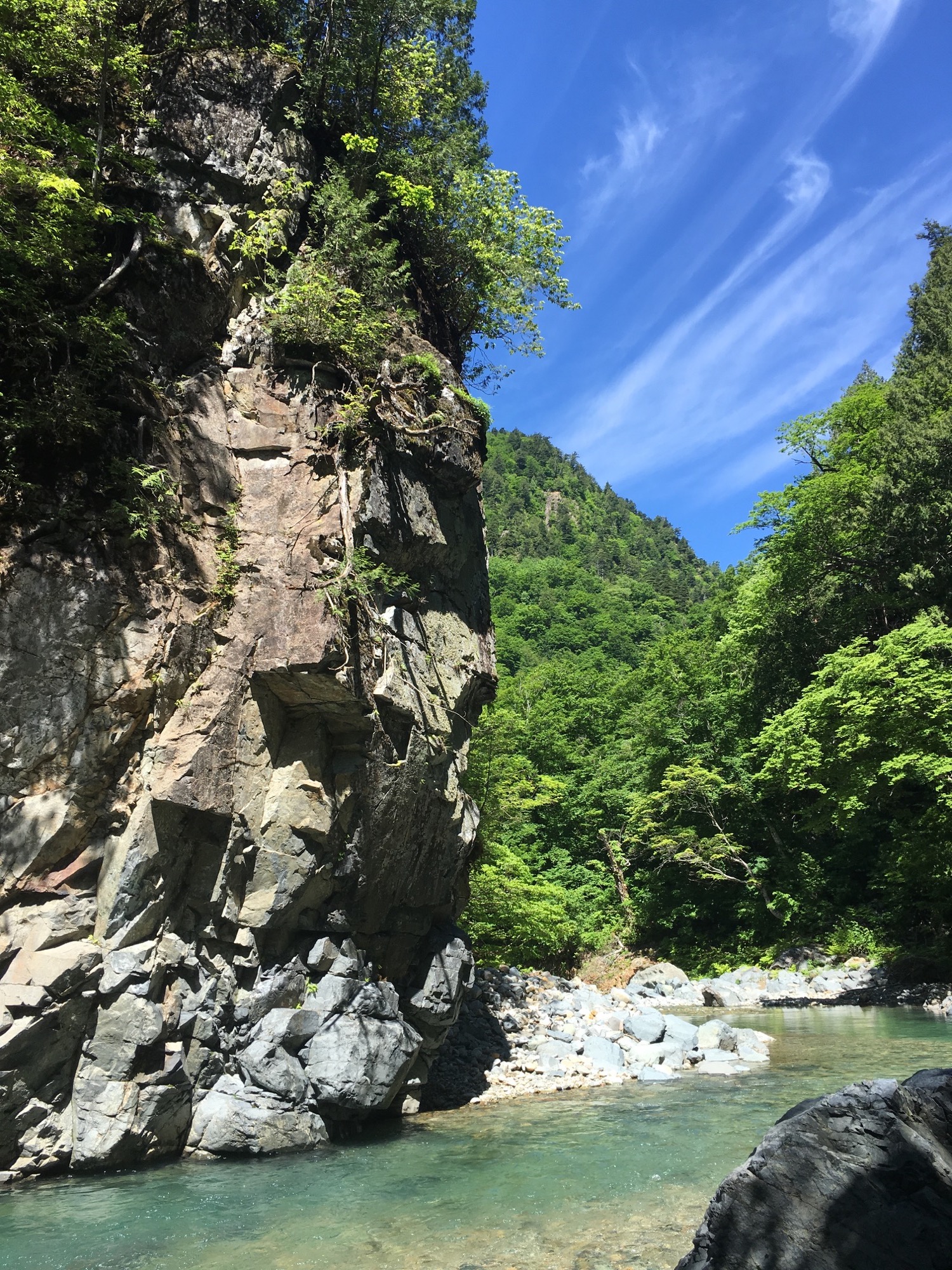 I had actually visited this area last season with my friend Hama. It was such a great trip and I really wanted to come back to do some more exploring. This past April I received an email from Martin Gamache. He and I had been exchanging emails and Twitter messages for over a year discussing tenkara, Japan, and the possibility of meeting face to face to do some fishing. After several calendar conflicts, funding issues, and last minute cancelations the stars finally aligned and we made plans to fish in Akiyamago together. 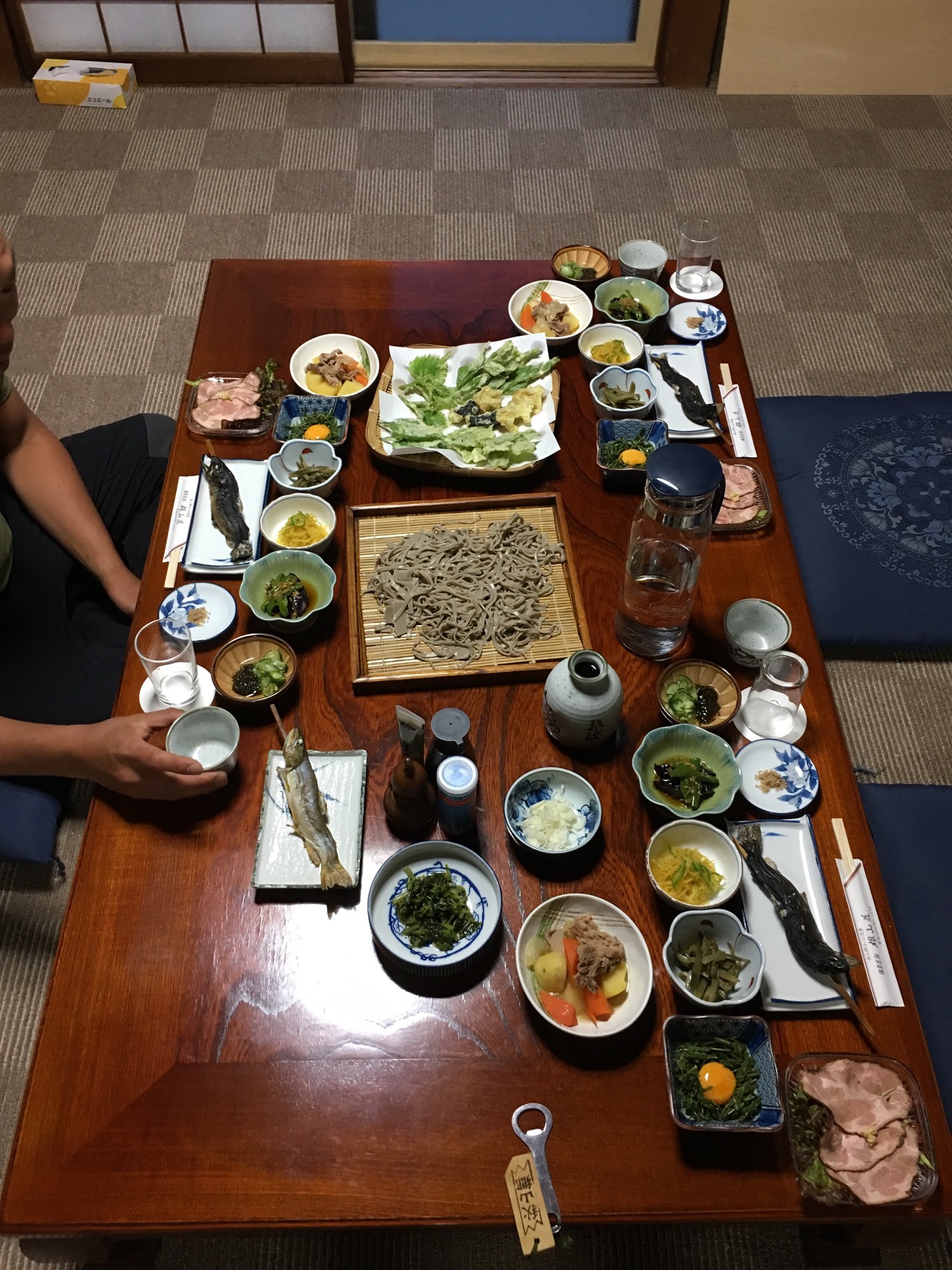 At 0330 I met my friend Junpei out front of my home and we drove into Tokyo to pick up Martin who had flown in the day before. Since it was super early in the morning we made good time into the mountains and by 0830 we were in Akiyamago. We suited up at the trailhead and piled into the back of  Yamada-san's kei truck for a quick drive down a bumpy dirt road. Midway down the road we came across a recent rock slide that was blocking the road. Martin and I proceeded to clear the slide while Junpei and Yamada-san returned to the trailhead to retrieve some forgotten gear. I was in the process of recovering from a particularly nasty lung infection and clearing the rock slide took a lot out of me. It was day one of three though so I pushed through the pain. Still I was brought to my knees several times that day with a rib cracking cough. 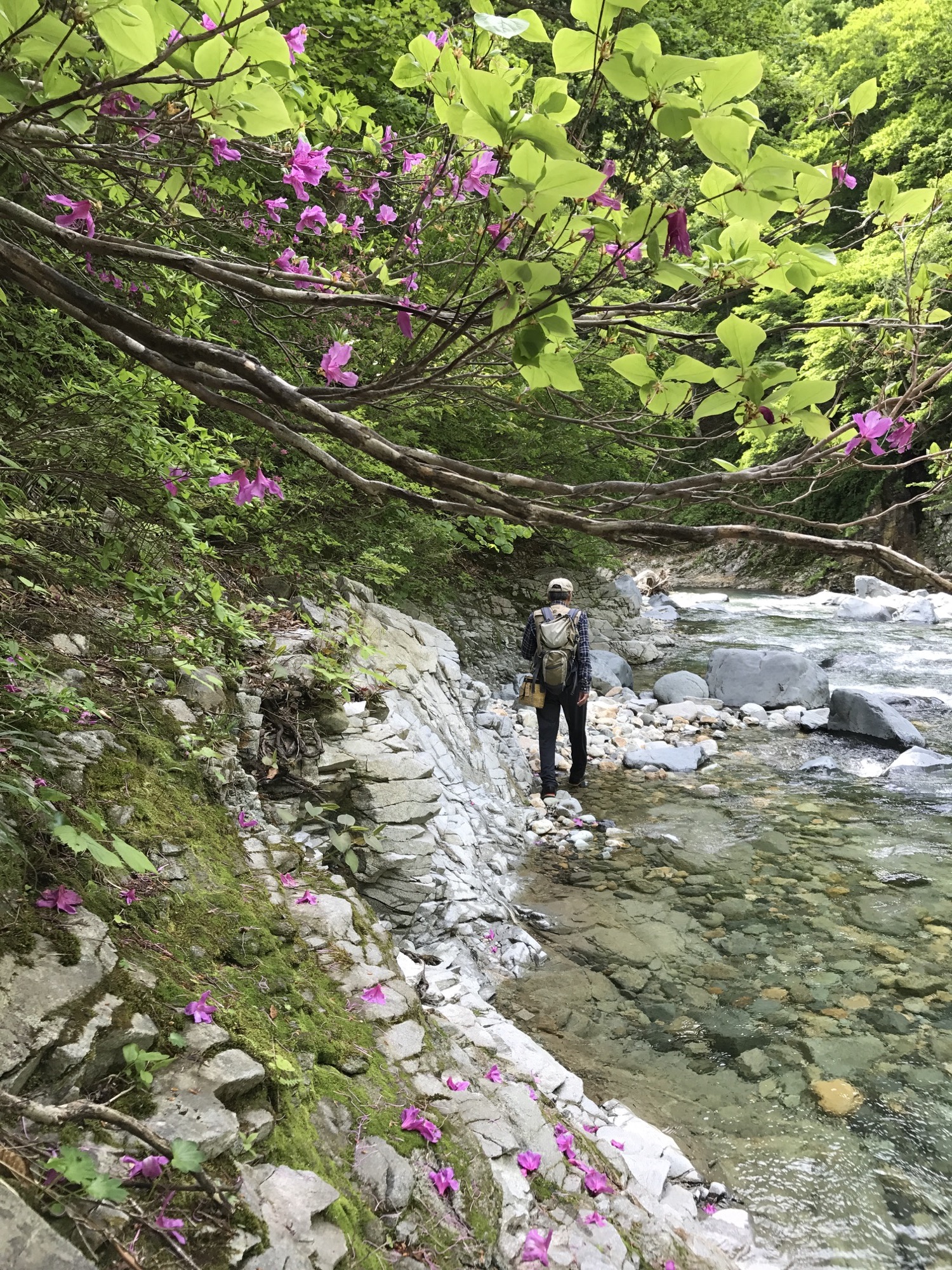 There was four in our party, but the river was running wide and deep so you could have an angler on each side of the river and those behind mopped up the overlooked areas, sometimes with good results. The fishing was slow in the morning but as we got further upstream the fishing action picked up, somewhere around 30+ fish all caught and released except for one between the four of us. I ended up catching the last fish of the day. After letting my kebari drift through a promising spot I left it in the water and moved upstream trolling my line behind me with the intent of using the water tension to snap my kebari upstream on the next cast. Suddenly my line came tight, I had a fish on! The fish were definitely getting hungry, but we had to turn around due to an impassable gorge (swimming that late in the day in the snowmelt fed river was not a viable option). 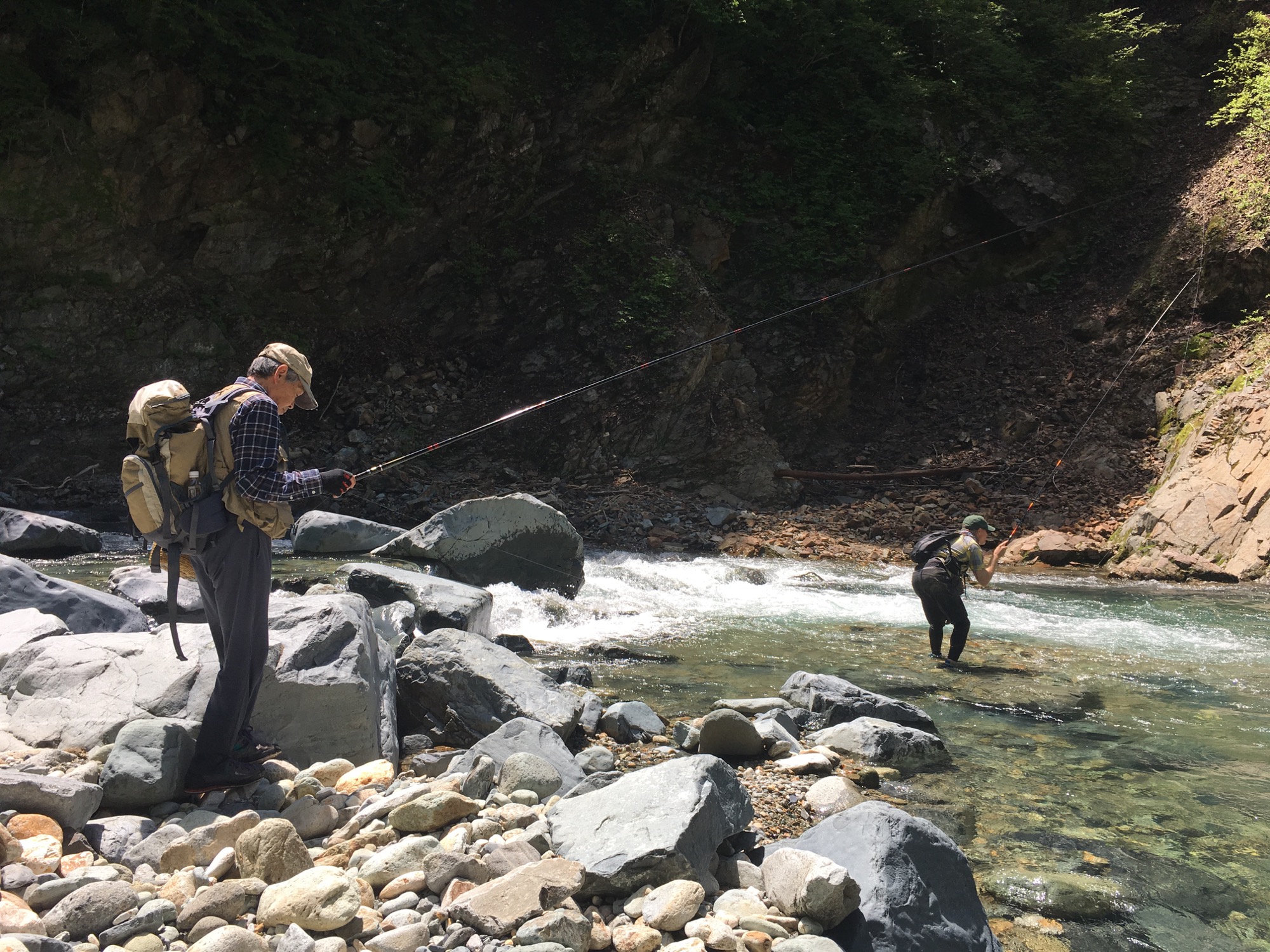 The second day dawned clear and cool. Once again the fishing at first was slow and then it picked up considerably. John Pearson had given me a Karasu (crow) feather kebari during his recent trip and the fish were slamming it left and right. Nine of the ten fish I brought to hand and released that day were with the Karasu kebari. As the fishing picked up rain clouds moved in and it dumped rain for the rest of the day. Around 1500 Martin and I were getting very hungry and cold so we called it quits for the day. The siren song of the onsen in Yamada-san's minshuku was too hard to resist. It was our last night in Akiyamago and so we stayed up late sipping beer and talking about bear hunting, sansai, and tenkara with Yamada-san. 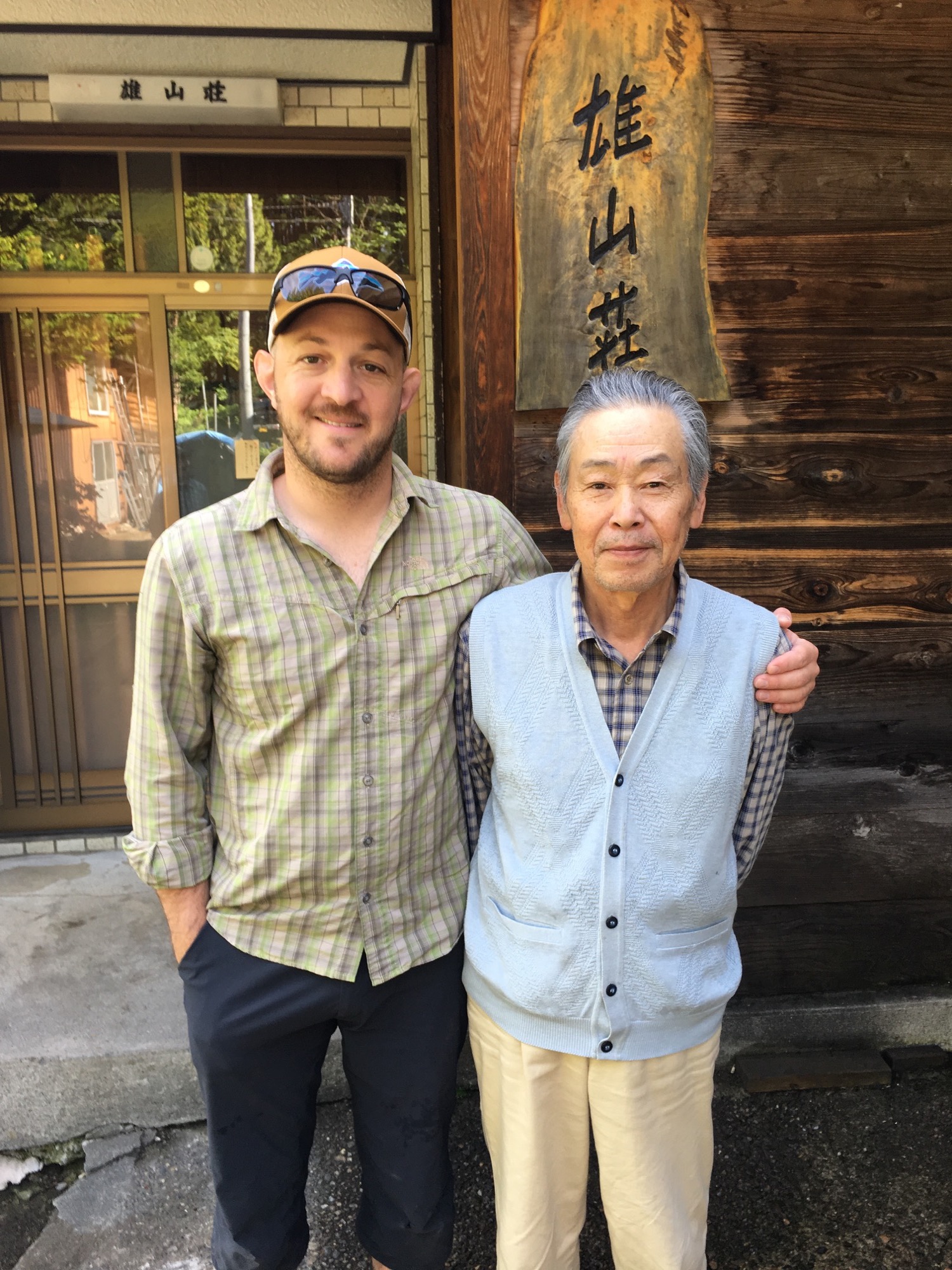 Yamada-san is a wonderful host. The first day he guided us on the river and that evening he gave us a Soba making lesson in the minshuku's kitchen. He is quite famous for his soba and the wooden soba making bowls he hand carves during the long winter months. It was truly an honor to spend two days and two nights in his company. The third and last day of our trip was upon us and we decided to head to another nearby region called Kiyotsu. There was a secret spot my friend Kado-san and I had visited last season and I was eager to see if it would be as productive as last time.

North of Mount Naeba there are several river valleys, the most famous of which is probably Kiyotsu Gorge. Many of the rivers in the vicinity though offer some fun fishing. Motivated by the memories of last seasons fishing action I suggested to Martin and Junpei that we head there on our third and last day. While the last two days had been spent on big water the Kiyotsu region is rife with small and tight keiryu. My Tenryu Furiabo had felt a little outgunned the last few days but the rivers in this area are the Furaibo's bread and butter. 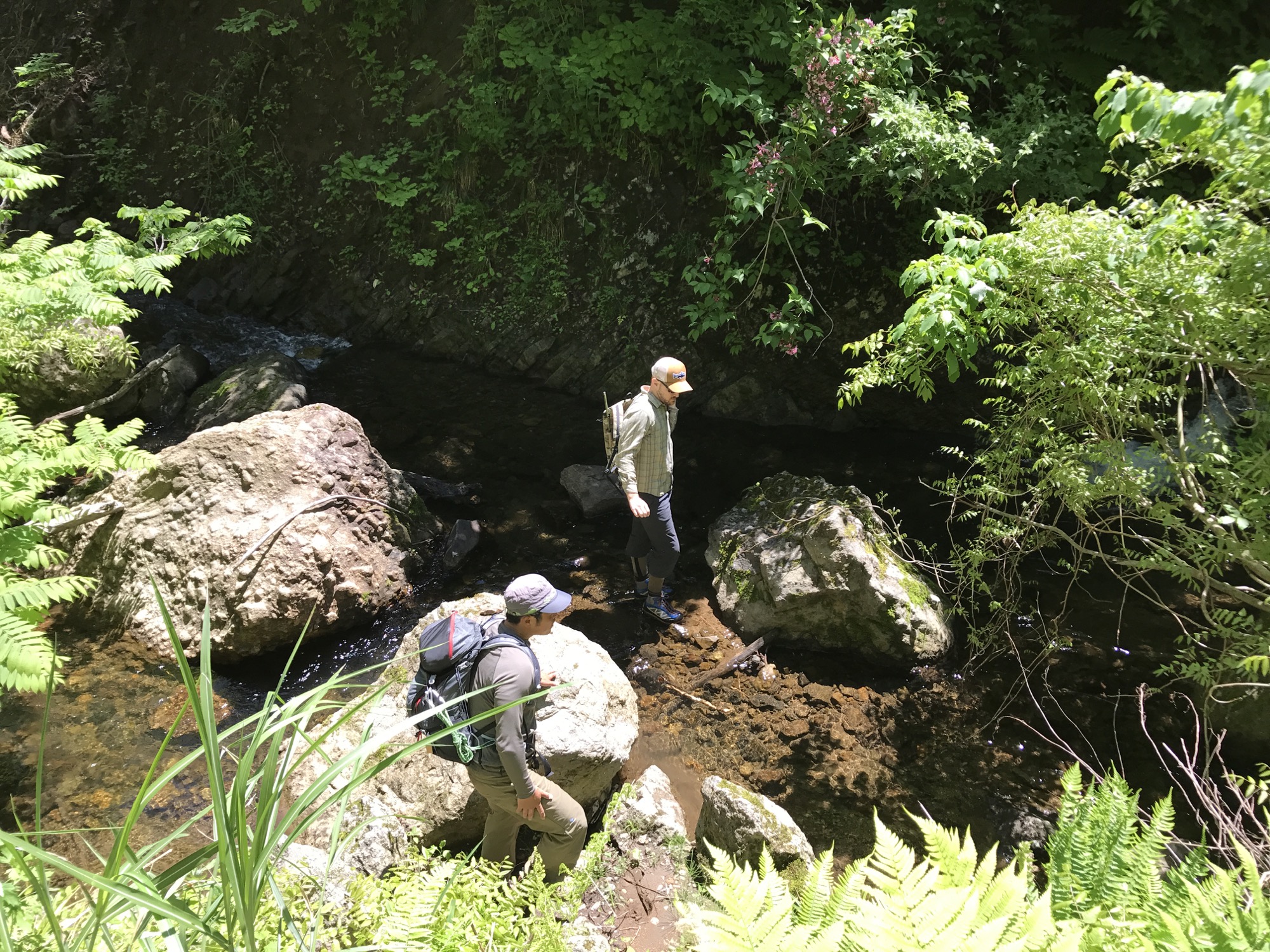 After hiking for about thirty minutes we dropped into the river valley and deployed our rods. I spotted a few fish in the first few pools and then for about two hours we didn't see a single fish. This was a new section of river for me and I kept telling the guys that last season the fishing was great higher up. So we pushed on to the section I had fished before. When we got there we saw a few more fish but they were very jittery and sneaking up on them was almost impossible. After about five hours of fishing I finally hooked a small Iwana and about 20 minutes later Martin nabbed one too. At the gorge that my friend Kado-san had eaten somen at last season I spotted floodwater debris 3-5 meters up in the trees next to the river. Sometime since last September there had been what looked like a very big flood. We speculated that the flood was the reason for the lackluster fishing that day. It will probably take a season for the river to bounce back. If another angler visits it though this season and pulls 25 fish from the river, it may remain devoid of fish forever... 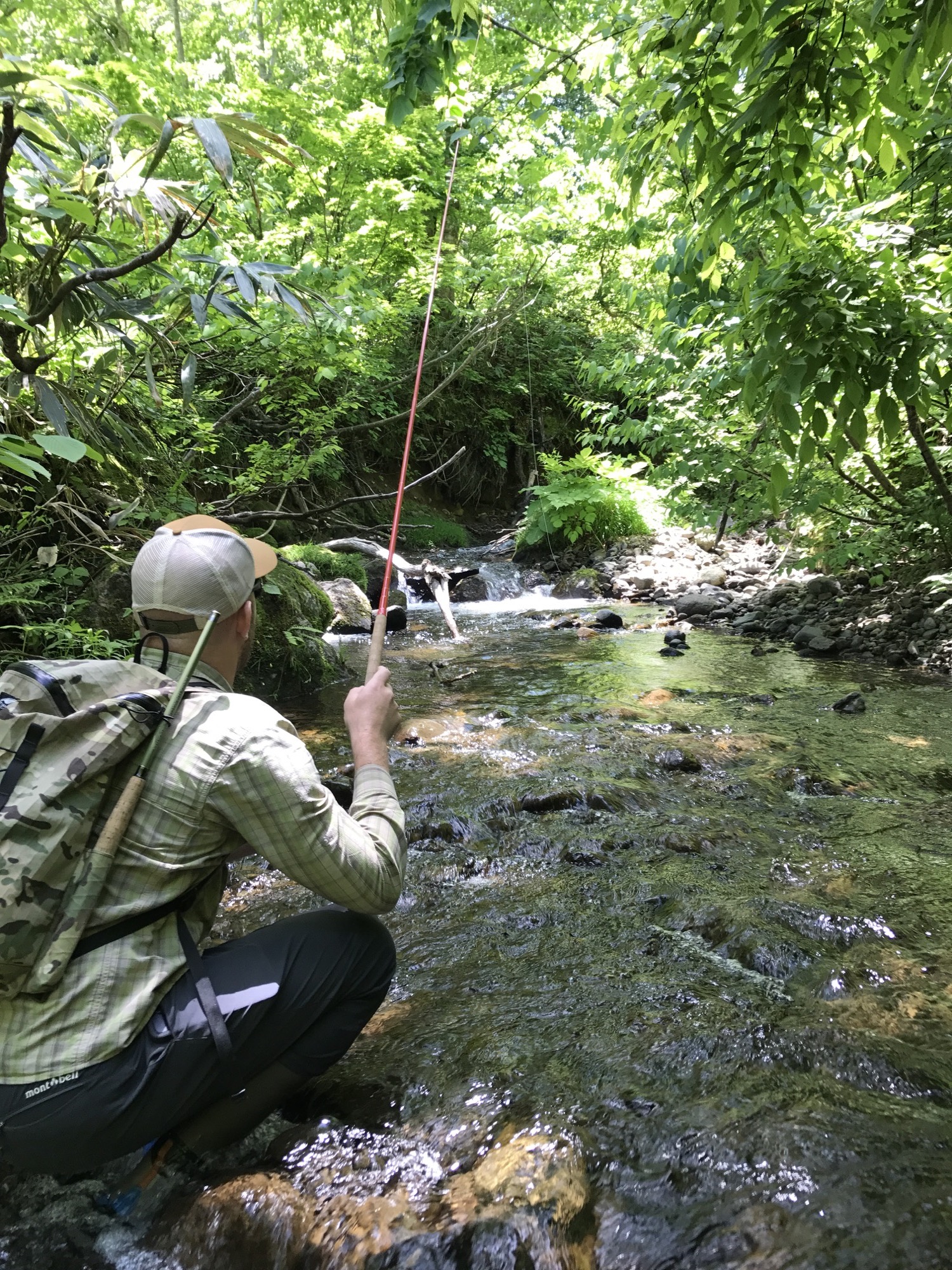 We wrapped up the day with a nice long soak at the inexpensive inn/onsen 渓山荘 and an absolutely delicious dinner at the Kometarou (かま炊きめしやこめ太郎) restaurant. The traffic on the Kan-etsu was unusually light and so we made good time getting into Tokyo to drop off Martin at his AirBnB. He had about 12 hours until his flight back to China and a few errands to run with Go Ishii the next day. I was missing my son Tadashi and eager to get home while simultaneously sad to be leaving the mountains behind. It had been a wonderful trip, the type of trip that makes me fall in love with Japan all over again. Good food, great people, awesome friends, and some seriously fun fishing - all in a gorgeous landscape. Japan is truly an amazing country. 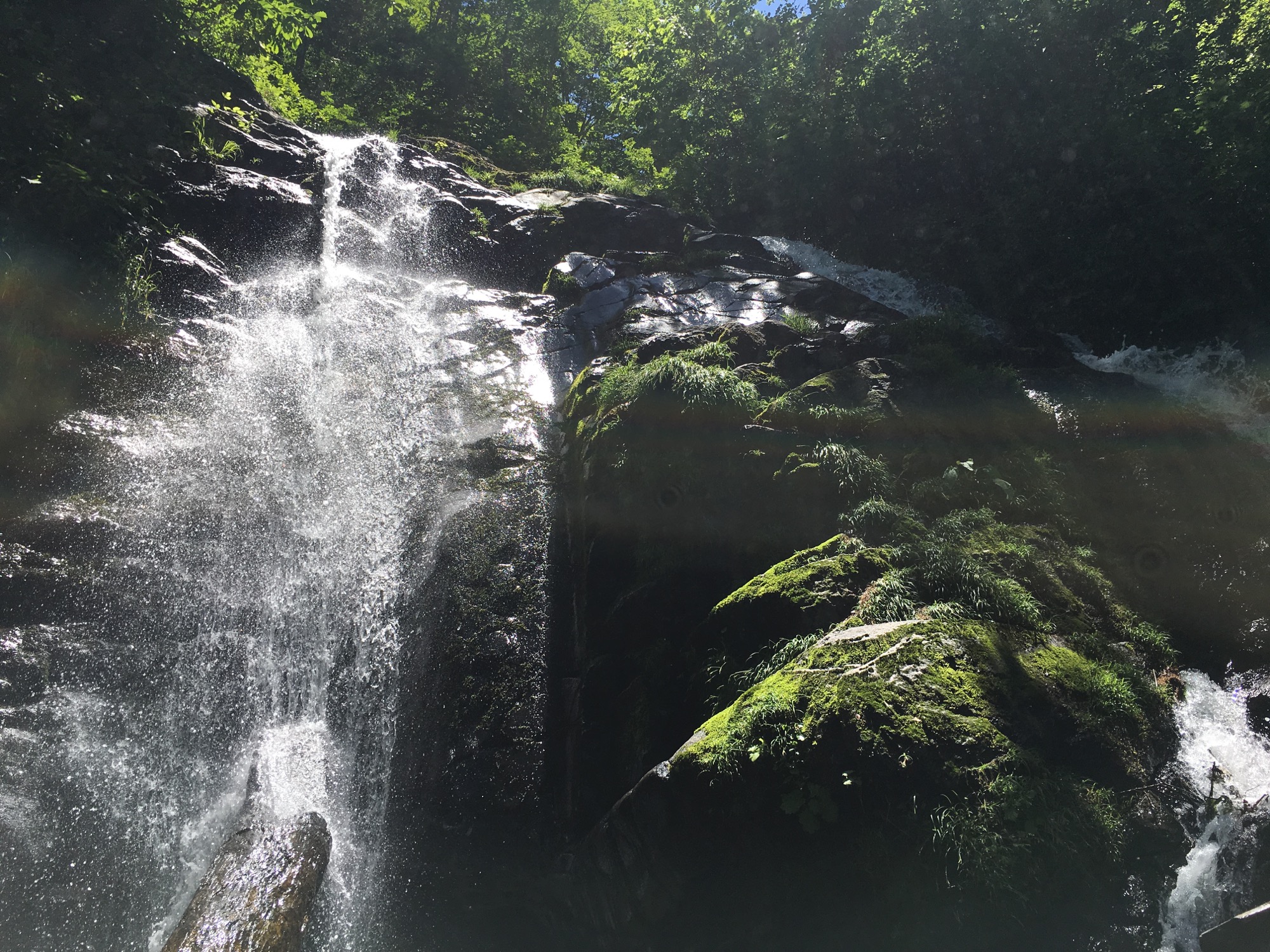 To see more photos from this trip check out my Google Photos Album here.